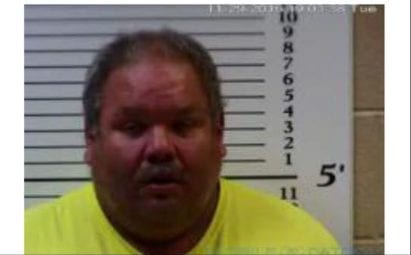 The Macon County Sheriff’s Office and law enforcement with the United States Forest Service took Keith Mann into custody late Tuesday evening in connection with arson and the wildfires that have been burning around Macon County since late October. Mann was held in the Cherokee County jail over night. Mann, who has worked part-time as a convenience center worker for Macon County’s Solid Waste Department since February, was charged with destroying real property of the United States by means of fire, according to a press release sent out Wednesday afternoon.

“Tips from the community played a vital role in this investigation,” said Macon County Sheriff Robert Holland. “It serves as a testament as to why it is so important that the law enforcement community works together and remains accessible to the public.”

I can’t give enough praise and thanks for the cooperation, leadership and law enforcement efforts put forth by Macon County Sheriff’s Office, NC and US Forest Service which lead to the arrest,” said Nantahala District Ranger Mike Wilkins. “On a day where we expect significant rainfall this arrest makes all of us, especially us firefighters overjoyed to be working with such great law enforcement agencies.”

The investigation into the arson cases continues and law enforcement believe that while Mann was arrested in connection to some of the wildfires in the area, additional suspects are still being pursued and any information is still being sought by officials.

Mann had his first court appearance in U.S. Federal District Court on Wednesday afternoon in front of U.S. Magistrate Judge Dennis Howell in Asheville. During an interview with U.S. Forest Service Special Agent Brian Southard, when asked why he set the fires Mann responded, “I guess I was just bored.”

According to allegations in the affidavit filed on Oct. 27, a wildfire was reported on U.S. Forest Service Road 388, Board Tree Road. The fire was named Grape Cove. Court documents allege that the initial investigation of the fire determined that it was set intentionally. Additional investigation revealed that five other fires had been set in close proximity to the Grape Cove Fire, however they appeared to have gone out on their own. As alleged in court documents, over the course of the investigation of the small fires, law enforcement located several wooden stemmed matches. USFS firefighters conducted suppression of the wildfire, which burned approximately 15 acres.

According to allegations contained in filed court documents on Nov. 22, a wildfire was reported at the end of U.S. Forest Service Road 763, known as Jones Creek Road by someone who identified himself as Keith Mann. USFS firefighters responded to the fire and took immediate suppression action. The fire was contained at one acre and was named Jones Creek. As alleged in the criminal complaint, law enforcement became aware that a suspicious vehicle, identified as a mid-sized Chevrolet Pickup had been observed in the area.

Additional court documents report observing numerous burned wooden stemmed matches next to a cardboard box located at the origin of the fire. Law enforcement made contact with Mann and he admitted to setting the fires both on Board Tree Road and Jones Creek Road.

The charge of destroying real property of the United States by means of fire carries a mandatory penalty of five years and a maximum sentence of 20 years in prison. Assistant U.S. Attorney Richard Edwards is in charge of the prosecution.

Mann’s detention hearing has been set for Monday, Dec. 5.