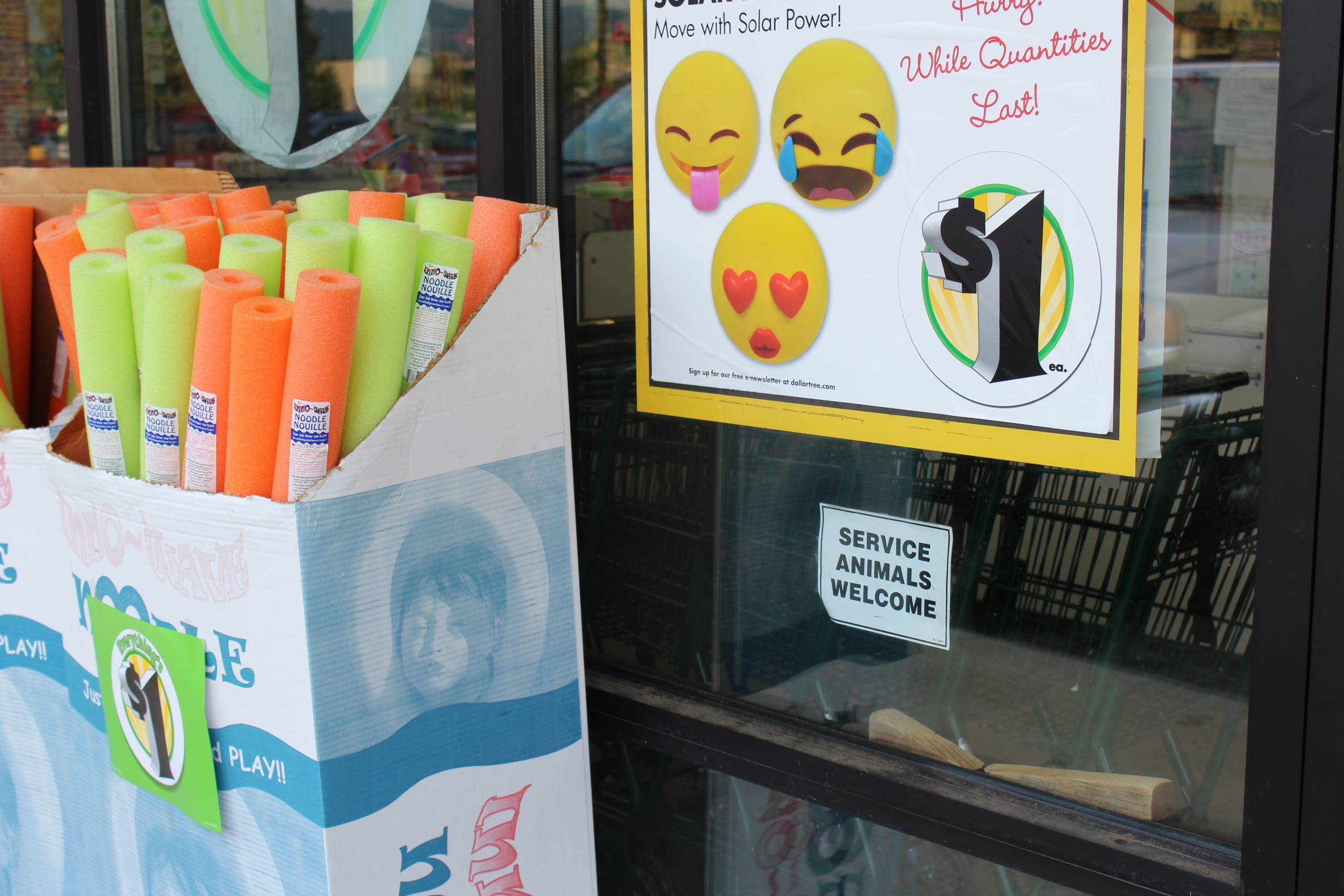 Service animals can provide invaluable help to people who are physically or emotionally impaired, but many people use untrained pets to receive privileges to which they are not entitled. “Fake” service animals are becoming more prevalent causing problems for those who need legitimate service animals and making it difficult for business owners to abide by the law.

In 12 states, including North Carolina, misrepresenting a service animal is illegal, and as recently as April, other states such as Massachusetts have proposed legislation to also make it illegal. While individual state’s laws vary on the issue, under the Americans with Disabilities Act, it is a federal crime to use a fake service animal.

Persons with disabilities have the same right as persons without disabilities to the full and free use of the streets, highways, sidewalks, walkways, public buildings, public facilities, and all other buildings and facilities, both publicly and privately owned, which serve the public, even when accompanied by a service animal.

Privacy protections built into the laws make it nearly impossible to prosecute offenders.

It’s even more difficult because no papers are legally required for real service dogs. In North Carolina, however, the North Carolina Department of Health and Human Service requires that service animals be registered with the state and have a tag that identifies them as a service animal. The North Carolina law states: “The person qualifies for these rights upon the showing of a tag, issued by the Department of Health and Human Services, under G.S. 168-4.3, stamped “NORTH CAROLINA SERVICE ANIMAL PERMANENT REGISTRATION” and stamped with a registration number, or upon a showing that the animal is being trained or has been trained as a service animal.” While the state offers a registration tag for easier identification of service animals, it isn’t required of the owners to possess one.

The problem and confusion comes in how often people who want to take their pets into restaurants or retail stores just go online to buy vests, backpacks or ID cards with a “service animal” insignia, without having to show proper documentation.

What is a service animal?

The Americans with Disabilities Act defines a service animal as “any dog that is individually trained to do work or perform tasks for the benefit of an individual with a disability, including a physical, sensory, psychiatric, intellectual, or other mental disability. Other species of animals, whether wild or domestic, trained or untrained, are not considered service animals.”

– the miniature horse is housebroken

– the miniature horse is under the owner’s control

– the facility can accommodate the miniature horse’s type, size, and weight

– the miniature horse’s presence will not compromise legitimate safety requirements necessary for the safe operation of the facility.”

Under the American with Disabilities Act, businesses must accommodate service animals. While some animals such as dogs, cats, or even chickens, may be considered as emotional support animals, they are not afforded the same considerations as service animals.

An Emotional Support Animal (ESA) is an animal that, by its very presence, mitigates the emotional or psychological symptoms associated with a handler’s condition or disorder. The animal does not need to be trained to perform a disability-specific task. The only legal protections an Emotional Support Animal has are 1) to fly with their emotionally or psychologically disabled handler in the cabin of an aircraft and 2) to qualify for no-pet housing. No other public or private entity (motels, restaurants, stores, etc.) is required to allow an ESA to accompany its owner and in all other instances, a ESA has no more rights than a pet.

According to Root + Barrel manager Robbie Lang, the law isn’t always so black and white. As a restaurant, Root+Barrel does allow service dogs, and Lang said they have several patrons who frequent the business often with their service animals.

“We only allow service dogs because the entrance to the patio is through the restaurant, so other dogs are not allowed,” said Lang. “We are only allowed to ask patrons if it’s a service dog, and we are not supposed to ask for documents.”

Lang is correct, service dog owners aren’t required to carry any paperwork on their service animals. The federal law is clear that due to HIPAA laws, business owners are only allowed to ask individuals with “service animals” two questions to determine if an animal is a service animal:

Is this animal required because of a disability?

What work or task has this animal been trained to perform?

Lang said that while the restaurant works to follow both state and federal laws, it still difficult and sometimes have other patrons complain when pets identified as service animals are inside the restaurant.

“Sookie is a German Shepherd,” said Nichole. “She was rescued from the Appalachian Animal Rescue Center three years ago. She was tied up in a field and left for dead. A concerned citizen would bring her food and water. Eventually, they brought her to the rescue center and we just knew she was meant for us. She has been trained for Tactile Stimulation, specifically for signs and symptoms of PTSD. This basically means that any signs of anxiety or stress she will attempt to prevent any impulsive or destructive behaviors to self or others. She climbs in laps, licks faces, paws, or anything to get your attention on to her and off the stressor. She does this mostly for my husband Jim Hill, a retired Navy veteran, but she will do this for anyone in her circle of family including close friends of ours.”

Day to day activities outside of work are typically always accompanied by Sookie.

“She is with us nearly every where we go,” said Nichole. “We don’t take her on cruise ships, she’s trained not to potty in public when she’s working so it would cause some training issues with her if we did. I do not take her to work either because I am a nurse. I don’t take her to the gym even though they have told me I definitely could. But otherwise she is with me or my husband.”

Nichole said she and her husband has been fortunate in Macon County, because the community is open and welcoming of animals in general, especially service animals.

“Generally, the people of Franklin are dog friendly and especially to service animals. I’ve been asked a lot of questions about Sookie and what she does, especially from children,” she said. “The only time I’ve ever experienced an issue was when I wanted to rent a vacation home for a weekend with my husband and they told me absolutely not. I frankly told them that I would not be spending my money with them. A privately owned residence does not have to abide by the same rules a hotel or other accommodation would. We’ve been excluded or segregated in running events as well. Sookie competes with me in all of my races. She is usually the only dog on the course. Her longest race so far has been a 10K and we are both training for a half marathon in September.”

More than just a service dog, Nichole said that Sookie is part of the family, and has been a literal lifesaver to them.

“Sookie is not only a service animal with specialized training but she is also part of our family,” she said. “PTSD has torn families apart and is a big contributor to veteran suicide. She knows how to be a dog, to play and have fun at home or the dog park. Once we put on her vest, she’s a totally different dog and knows it’s time to work. Our life with her has been exponentially better.”

Nichole said that animals being misrepresented as service animals is a significant problem and something she hopes people would reconsider.

Macon County resident Melissa Kraft also has a service dog, who she says has saved her life on several occasions.

“Tiny has saved my life on several occasions,” said Kraft. “I’m disabled. I have lots of health issues. Tiny has detected when I was having heart issues, she has improved my breathing problems due to asthma. She can tell when my sugar level gets too low.”

Kraft said that she has encountered problems with educating the public on the need for her service animal to be close.

“When my kidneys failed and I was transported to Mission Hospital in Asheville, the EMT would not allow her to be with me,” she said. “They had to sedate me. As sick as I was, I had never been separated from her. I told off the staff for forbidding me to have her. When my mom got to Mission and I came to, the first words I said were ‘Where is Tiny?’ The head person over the nurses told my mom to go get Tiny.”

In a restaurant in Franklin on one occasion, a table complained about Tiny being present in a dog stroller. Although she didn’t have to, Kraft proved Tiny was as service animal and the family apologized and bought her meal. Kraft said that educating the public on what a service animal is is important.

Kraft said that the bond she has with her service animal is monumentally important.

“Tiny and I have a bond,” she said. “I got her when she was seven weeks old, now she is five years old. I previously had another service animal that passed away. I took very sick. My doctor told me after I got Tiny, he saw how much my health had improved. He is the one that recommended me to get her registered as a service dog.”