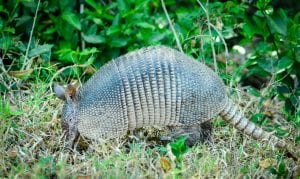 Life is full of surprises.  Recent dinner guests on their way home spotted an armadillo on our driveway.  Fortunately, they were able to photograph it.  I checked with the Forest Service agent and he said they had never been reported in Burningtown and a while back only one was reported on the other side of town.  This is not altogether good news.  These burrowing critters are destructive, feeding on grubs and other underground insects.

There are nine genus of Armadillo world wide and 13 species. The one that has traveled from South America to the U.S. via Central America is the Nine-banded Armadillo. It has been moving northward for a hundred years.  It has no natural predators so its migration has been unchecked except by humans. 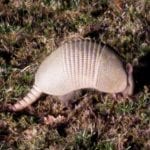 It’s armor-like skin seems to be its main defense.  Armadillo in Spanish means “little armored one.” Portions of its upper body are covered in a boney armor.  The Nine-banded has 9 or 10 moveable rings between the shoulder and its hip shields. Other species have fewer rings. It has short legs but can move quickly.  When surprised it jumps straight up in the air often colliding with the undercarriage or fenders of vehicles.  It can travel under water holding its breath for up to six minutes.  To cross large water expanses, it can increase its buoyancy by swallowing air inflating its stomach and intestines.  It has poor eyesight but has a keen sense of smell.

Its natural habitat is wetlands and along streams where it digs a burrow for its home.  It is nocturnal.  Oddly Armadillo always give birth to identical quadruplets.

Besides the fact that this burrowing animal tears up lawns and golf courses it is feared by humans because it can harbor leprosy bacteria.  Medical scientists have used this animal in laboratories to study leprosy.  This is partly possible because it has a very low body temperature.  It is suspected that humans can contract leprosy by handling an infected animal or by eating armadillo meat. But this is not a solid scientific fact. This information should be regarded as a caution. They have long been a human food source nicknamed “poor man’s pork” or “Hoover Hog” by those who blamed the Depression on President Hoover.

Armadillos can be trapped, shot or poisoned to control their numbers. So far Franklin only has one recently reported, a South American neighbor. Would  a border wall have prevented its migration?

There once was an armadillo

That came from Amarillo

He discovered an 18-wheeler

To really be a killer

Now the armadillo from Amarillo

Lies in death on a concrete pillow

Perhaps he should have stayed in Amarillo

Karen Lawrence is a professional photographer of botanical subjects and wildlife from Franklin, N.C.