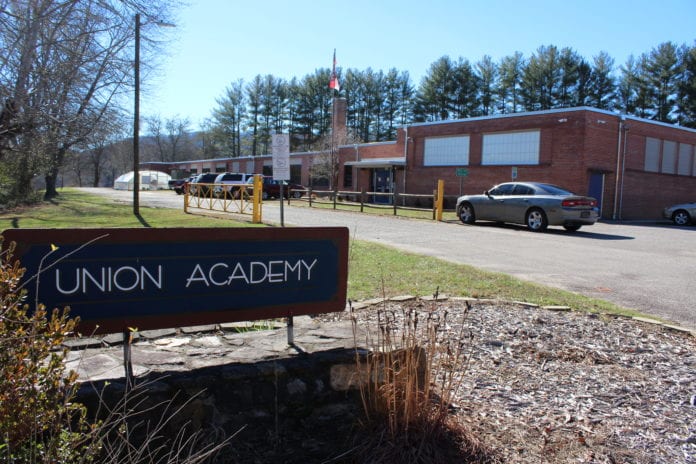 Alternative Learning Programs and Schools (ALPS) are safe, orderly, caring and inviting learning environments that assist students with overcoming challenges that may place them “at-risk” of academic failure. The goal of each program and school is to provide a rigorous education while developing individual student strengths, talents, and interests. In Macon County, Union Academy has served at risk students for 17 years, and looking at dropout trends for the district, the school is proving to provide an alternate learning environment that helps students be successful.

The 1985, the General Assembly established the state dropout prevention fund as a part of the Basic Education Program. The intent of the General Assembly was to increase the number and range of services to at-risk students. It is the policy of the State Board of Education that dropout prevention and students at risk services be a part of the educational program of every local education agency (LEA). The state board has established the goal of reducing the dropout rate in North Carolina. To facilitate the accomplishment of this goal, the State Board of Education has adopted a performance indicator in guidelines for implementation of the School Improvement and Accountability Act and a standard in state accreditation which requires all local education agencies to set a goal for the reduction of their dropout rates.

From 2010 to 2013, Union Academy housed about 60 students each school year. The school, which serves students beginning in seventh grade, also averaged about 16 dropouts a year. In comparison, Franklin High School during the same time period averaged about 15 dropouts each year.

In 2013, a few months after Dr. Baldwin assumed the role of Superintendent of Macon County Schools and Barry Woody replaced Baldwin as Principal of Franklin High School, the enrollment at Union Academy nearly doubled.

“The increase in enrollment in 2013-14 was primarily due to the expansion of an alternative learning program which involved online learning opportunities,” said Dr. Baldwin. “These classes were originally held on the campus of FHS. This online program has since been moved to Union Academy along with a shift in personnel.”

The new administration also changed the policy for students who took classes at both FHS and Union around the same time period.

“At about this time, we also modified our policy of shuttling students between FHS and Union Academy at every period change,” said Dr. Baldwin. “Students were losing too much instructional time as a result of all of this travel.  We began only shuttling students at mid-day.  This means that some students are assigned to Union while also attending two class periods at FHS.  The two periods at FHS are usually electives that cannot be offered at Union Academy due to the staffing issues that you mention.”

The two years following the doubled enrollment at Union Academy, despite having more students, the average number of annual dropouts actually decreased to 11 a year. For the 2014-15 school year, with twice as many students, the administration at Union Academy, which was led by a new principal, Diane Cotton, was able to decrease the school’s dropout rate.

Students who attend Union Academy are all from the Franklin area. While students from the Highlands and Nantahala schools have utilized the school in the past, currently, the school’s 135 students would attend FHS if not for the alternative learning school. The same year enrollment at Union Academy doubled, meaning 50 more students a year were sent from FHS to Union Academy, FHS’ dropout rate essentially disappeared.

Union Academy has helped to improve Franklin High School’s graduation and dropout rates, while taking on more students, and implementing programs that ensure students who are identified as being “at-risk” of dropping out receive the education they deserve and wouldn’t get in a typical environment.

“We utilize many strategies and programs throughout the day to help reach students,” said Cotton. “We have academic programs specifically designed to help at-risk students. The personal relationships that alternative school educators are able to build with their students make all the difference. Every teacher and staff member in the school knows every student by name.  Teachers eat with students; they are with the students at all times, even during class breaks.  This creates a close atmosphere and our students know that every adult (lunch ladies, custodians, SRO,  teachers, graduation coach, facilitators, administrators—everyone) is genuinely concerned about their wellbeing. The purpose of an alternative school is to provide for and to meet the needs of at-risk students.  At Union, we endeavor to provide the state required standards with rigor while still working with students to provide more academic assistance and smaller class sizes, while also meeting the personal needs that are non-academic.”

Cotton noted that when the school doubled in enrollment in a year’s time, to ensure students continued to be served to the best ability of the school and staff, changes were made to accommodate the transition.

“During the ’12-’13 school year, most students completed their online credit recovery classes at their home school.  Those online classes were moved to Union Academy and students were then sent to Union from FHS, MEC, etc., to complete those classes,” said Cotton. “Those students were moved to Union’s attendance roles. The school has not expanded in area.  However spaces were reconfigured so that additional high school classroom space was made available when the building was renovated last year.  Additional staff? We have shifted our middle school teachers to teaching grades 7-9 and we now offer one class period a day for Health and PE. We also have added a full time ISS facilitator, and Online facilitator,  and we have an SRO that we share with South Macon.”

The decision for a student to attend Union Academy is left up to the principal of the school the student would be leaving, so when Woody assumed the role of principal of FHS, he was charged with following the district’s policy on students eligible for the alternative learning program.

“There is no typical student at Union, each student arrives with their own set of needs, strengths and circumstances,” said Cotton. “We try to develop an educational plan for each child to succeed.  However, plans do not always result in the prescribed outcome when dealing with real life situations.  Last year Union graduated 27 students. This does not include the students graduating from FHS and MEC who graduated because they attended Union for a year or a semester to reset their academics and moved back to graduate with their class.  Before the inception of an alternative school in Macon County, those students would have been drop outs.   Any student we help to reach that graduation goal is a success and their future life as a citizen of Macon County is enriched.”

A. Document the procedures that were used to identify the student as being at risk of academic failure or as being disruptive or disorderly;

B. Provide the reasons for referring the student to an alternative learning program or school; and

C. Provide to the alternative learning program or school all relevant student records, including anecdotal information.

Voluntary transfers are encouraged whenever possible. A voluntary transfer is an agreement by the parent, the principal, and the disciplinary review committee that transfer is an appropriate option for the particular student. A student may be required to be transferred from the regular educational setting to an alternative learning program or school under any of the following circumstances:

a. the student presents a clear threat to the safety of other students or personnel;

b. the student presents a significant disruption to the educational environment in the regular educational setting;

c. the student is at risk of dropping out or not meeting standards for promotion, and resources in addition to or different from those available in the regular educational setting are needed to address the issue;

d. the student has been charged with a felony or a crime that allegedly endangered the safety of others, and it is reasonably foreseeable that the educational environment in the regular educational setting will be significantly disrupted if the student remains; or

e. if the Code of Student Conduct provides for a transfer as a consequence of the student’s behavior.

Dr. Baldwin noted that because of the diverse group of students at Union Academy, the school’s staff and community partnerships are crucial in ensuring the students are afforded every available opportunity.

“Students have staff mentors. Administration and teachers have frequent contact with parents and guardians,” said Dr. Baldwin. “Partnerships with community organization assist students who might be living on their own, dealing with pregnancy students, or may already be dealing with the challenges of supporting a family.  Staff are utilizing motivation techniques acquired through professional development.  Lessons are differentiated based on student data and observation.  The entire staff is currently receiving professional development on Project Based Learning provided and specifically designed by NCCAT to meet the needs of Union students. Teachers also work with students after school and during Saturday schools to facilitate one-on-one instruction.  Partnership with SCC for dual enrollment classes through the Career & College Promise program which have included Automotive Systems Technology courses, Nursing Assistant courses, Web Technology courses, and Office Administration courses are also being utilized to encourage students to stay in school.  Additionally, the entire staff is also trained in [Crisis prevention] de-escalation techniques. Union Academy also utilizes the assistance of the graduation coach housed at FHS. All these programs and strategies are an attempt to provide a safe and caring environment for students and to motivate them to complete their high school requirements.”

Town approves special use permit for construciton of a new Ingles

Previously closed schools open on Plan B; Nantahala shuttered through...