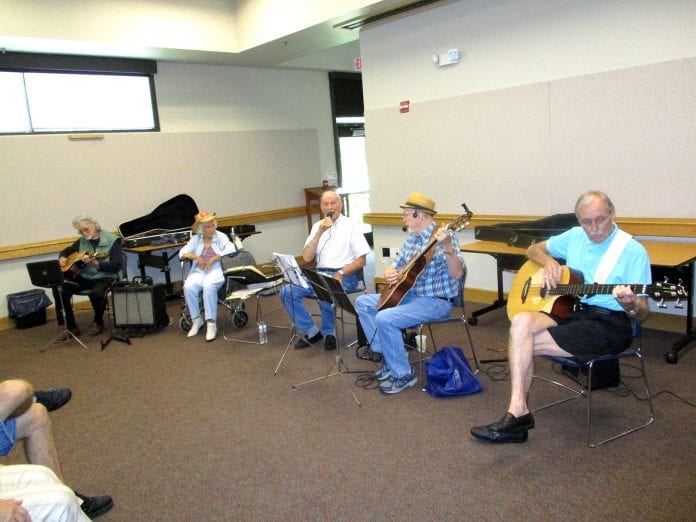 Here are a few questions to get your mind rolling. What do toe tapping, finger snapping and sidesplitting laughter have in common? Give up? Well, the answer is an audience seated for a “ride” with the musical group, the Vagabonds. Ready for another one? Who can poke fun at themselves while singing an outhouse song called, “Four Rooms and a Path,” then slide effortlessly to inspire a room full of people to sing “Because He Lives?”  Yep, surely, the answer is on the tip of your tongue. It’s the Vagabonds.

Well before the set begins, the audience is treated to some down-home conversation. “We’re glad you’re here to hear us, but we also want you to participate and have fun with us,” said vocalist Mary K. Sullivan who calls herself a Hillbilly from the other side of Hendersonville.
Now a core group of five musicians from 79 to 88 years old, each individual has an impressive history in the music industry, including winning medals locally for the Senior Games. The other four members are organizer Jim Hite on guitar, Bill Jackson on harmonica, Harry Miller on guitar, and Toby Tobias on bass. They sometimes include guest artists, and all sing and several play multiple instruments. From homemade music venues in their childhood dwellings to stages across the U.S., including California, Arizona, Florida, Nashville and the Smoky Mountain Performing Arts Center, family members have survived their missteps and audiences have reaped the benefits of their time-tested performances.
“My mother would bring me little plastic harmonicas from town,” said Jackson. “I would get behind the big heater stove and blow that thing. She said, ‘I’ll be glad when you learn to play that; you’re driving me crazy.’” After 83 years of practice and a beautiful 10-harmonica collection, she would most likely be proud of Jackson if she were alive. Now, his greatest joy is being with the crowd.
Listening to the Franklin area group, it becomes clear why the audience of 35 had flowed into the Macon County Public Library to see and hear them. With only a couple of seats left to choose from, latecomers had to squeeze into the seats and fit into whatever groove the Vagabonds were into upon their arrival. From Sinatra-style ballads to old-school country (i.e. Josh Turner’s “Long Black Train”), gospel, pop  and folk songs, there was something for everyone.
Tobias says he enjoys performing a variety of music with the group that began having weekly jam sessions at the community building 15 years ago. Many of the original members have passed or become too ill to perform. He’s happy to still be around to touch audiences as the group sings his favorites that include “For the Good Times.”
“You’ve got to have words that mean something and touch you,” said Tobias.
Tobias spoke of obstacles overcome and Hite displayed two thumbs that have been operated on so he could continue playing – just a sample of what the group has weathered.
“What keeps us going is we all love audience participation and that way we all get something out of it,” said Hite. “We are not professionals; we are just seasoned amateurs. We can play just about anything.”
Despite Miller’s cancer and Sullivan’s Parkinson’s disease, love and music keep the couple together. Miller crooned to his wife a song about meeting her while waiting in the Port-o-John line. It was quite comical; however, the truth is, a mutual friend introduced the couple at a jam session in Arizona because of their shared musical interests. Miller had a prolific career with a barbershop quartet and Sullivan and her sisters have toured western North Carolina singing on stages and on their radio show.
“I’m glad Mary K. Sullivan is able to be here,” said library organizer Kristina Lynn Moe. “I was so happy to see her; she’s not able to come out like she used to.”
Although Sullivan has slowed down, she engaged the audience in comical banter, and they did not disappoint her with their response, prompting her to show the audience what they had been missing. “Grandma Slid Down the Mountain” showcased Sullivan’s yodeling and her instruction that yielded a fun chorus from the participants.
“They say she used to make the paint fall off the wall,” said Miller.
“Now they accuse me of having the clock fall off the wall,” said an upbeat Sullivan.
The Vagabonds plan to continue to play as long as they are able to and are already booked solid for a year, including monthly performances at the library. True to one of their lyrics, “Nothing could be sweeter than to be in Carolina in the morning,” the group travels about a 30-mile radius from Franklin, favoring the joy they bring to nonprofits – especially nursing homes. With their varied repertoire of at least 15 numbers per show and mastery of audience engagement, it’s no wonder they have booked seven shows per month.
“We take requests a year ahead of time,” said Hite. “And all you have to do is write it on a $50 bill and send it up.”
The humor is a mainstay of the heartwarming performance, prompting several audience members to remain in their seats wanting more.
“We really enjoyed ourselves and look forward to the next show,” said first time attendees Jane and Fred Frankland.
Sullivan says they always have fun and with the Vagabonds, the most memorable event is always the last one they’ve done.

Hasbro providing incentive to ramp up Toys for Tots donations