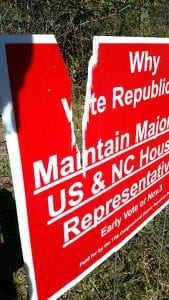 Vandals are expressing their political opinions far from the polls this year in the most unsavory ways, say party representatives. The Macon County Republican Party headquarters has been the target of vandals, while Democrats have found their party’s signage in area dumpsters.

One morning, GOP volunteers arrived at the party headquarters at 867 Highlands Road to find a penis and horns drawn on the face of Judge Kristina Earwood’s sign. A nearby 4 x 8’ Mark Meadows sign was stolen. In other cases, signs as large as 4 x 8’ have been driven over.

“You have to deliberately haul those off,” Miller said of those who steal the larger signs. “It’s criminal. It’s a misdemeanor punishable by a $1,000 fine.”

The party chair said she frequently discusses the issue with the sheriff but has yet to file a criminal complaint. But she will.

“We have game cameras everywhere and as soon as we get a tag, we will prosecute,” she said.

In Buncombe County, 38-year-old University of North Carolina Asheville professor Amanda Wray was charged with a misdemeanor for removing a political sign. Wray was apprehended when police acted on a photograph of her license plate captured by a member of the organization that placed the signs.

“We have lost the heart and soul of our marketing campaign this year,” Miller said of many of the 50 “Why Vote Republican” messaging signs that cost the local GOP about $900 to produce. The core values campaign, which she said was inspired by research from Rep. Kevin Corbin, is being replicated by six other area counties.

“It’s been very hard for us to keep signs in the field,” he said. “We’re losing them across the board.”

Gladden said signs on major highways fare better, but some citizens who see signage when they visit recycling centers simply pull them out of the ground and toss them in garbage dumpsters.

The Democratic Party headquarters spent between $2,000-$3,000 for signage this year, he said, with candidates self-funding their signs. Gladden said larger signs are less targeted, but that police have more important things to do than chase down sign thieves.

Miller said she carefully instructs all her volunteers not to remove or cover up other political signs, and to be careful in the event they see someone committing such a crime.

“Do not engage. Back up politely and take a picture,” she said are her instructions. She said there’s always a chance of a rogue party member not following the law, but emphasized that she is “big on protocol and how this organization is run.”

Another tactic she has used to protect signage this campaign season has been to assign a single person responsible for the signs near their home, or on their morning commute. Nonetheless, those individuals are reporting lost signs “every day.”

“It is a problem and it has been costly for us,” she said. “It’s par for the course of our how our nation is right now.”

“It’s obviously someone with very little respect for the First Amendment.”