When Rick Norton pried the lid from his post-war “box,” the first things he recognized still inside were pain and guilt. The box that had sat on his mental shelf for 40 years needed attention and could no longer be ignored. It had had a few trial runs with the Vietnam veteran colleagues at his post, but it still needed some emptying. It was time for a full reckoning. When his best friend and fellow Vietnam veteran, Deryle Perryman, called as had been his pre-Vietnam-trip routine for almost 10 years, this time Norton was ready. It wasn’t fear, disdain for former enemy Viet Cong and the North Vietnamese, or lack of funding that held him back; it was something much more personal – his commitment to taking care of his wife, Anita. “Perryman started going back to Vietnam in the mid-’90s, and every time he would go he would ask me to go with him,” said Norton. “I couldn’t. I had a wife who had a disabling disease . . . MS [multiple sclerosis], and I just couldn’t take off and go for two or three weeks. I just didn’t feel right doing that with her. I said, ‘man you know how much I love you, but I just can’t.’” He left Vietnam in December 1968, but the return trip would have to 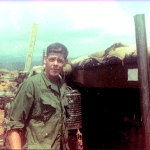 Corbin and Davis sponsor legislation that could speed up broadband process