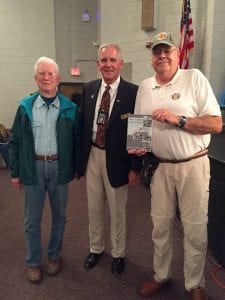 Last Saturday night at Franklin High School’s Fine Arts Center, 14 Vietnam veterans involved in a creative writing program at the Charles George VA Medical Center in Asheville, read passages from the published book, “Brothers Like These.” The creative writing program was led by VA physician Dr. Bruce Kelly. He shared that the writing program, which also involved professor at Appalachian State University and past North Carolina Poet Laureate Joseph Bathanti and therapist/writer Elizabeth Heaney, “honors the voices calling out to be heard.” Dr. Kelly added, “They were reluctant to bring the war back up, but ready to try anything that might help [with PTSD]. For many, the program has been a transformation in ways they couldn’t imagine.”

During the event, participating Vietnam veterans representing Marines, Air Force, or Army, who did tours in the Vietnam War from 1967 to 1972, shared poetry, essays, and first-person narratives. Writings focused on life before, during, or after the Vietnam War. For example, David Robinson read his “Across the Sea,” which included such verses as “So different across the sea, especially for a country boy like me”… with a final verse, “I think of what my life would be if I had not gone across the sea, but I would never have met brothers like these.”

Shriners and Gems volunteer ‘for the kids’