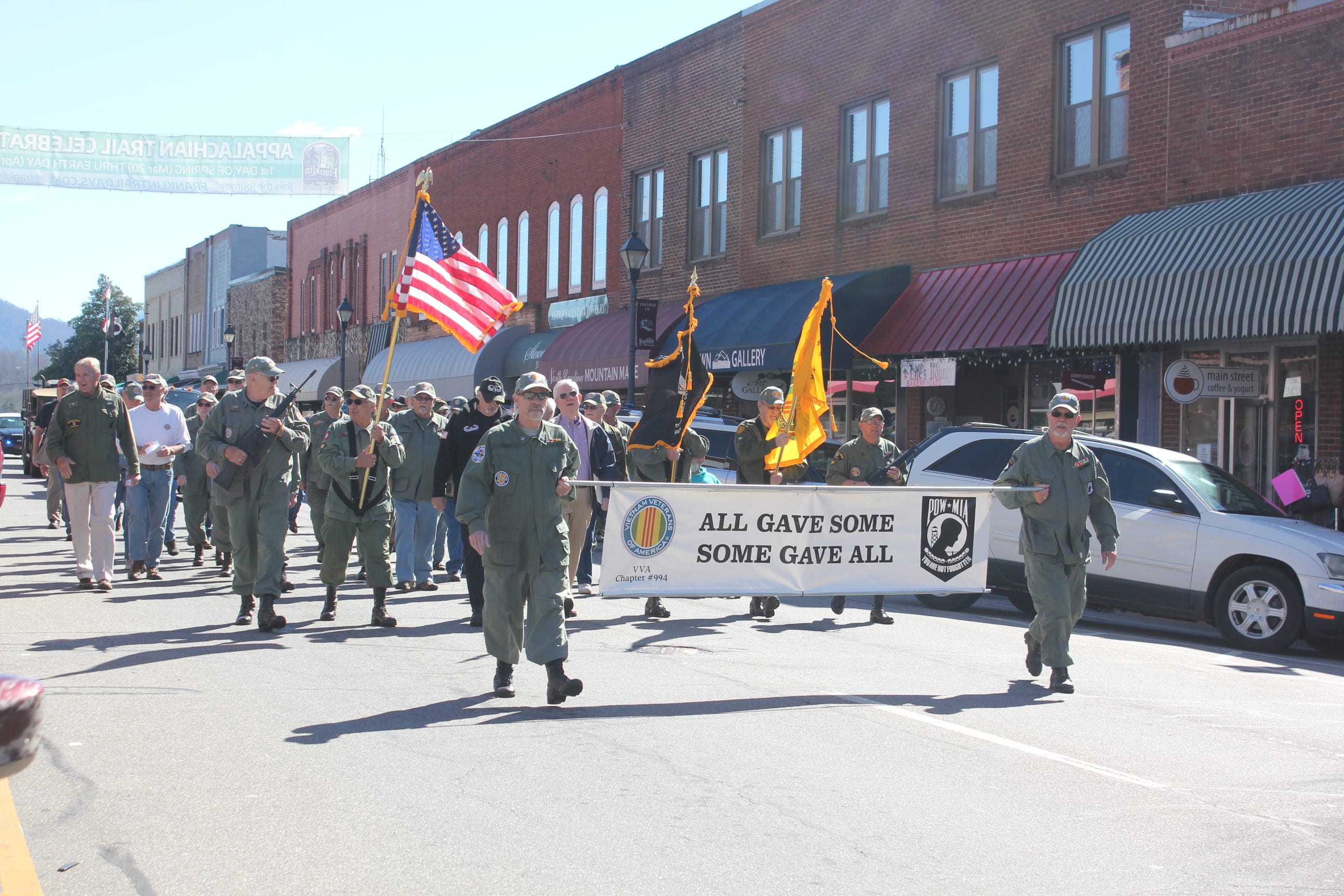 Vietnam veterans, their families and friends gathered on Main Street on Saturday, for a special parade, ceremony and wreath-laying. The ceremony observed the 44th anniversary of the final withdrawal of American troops from Vietnam.

Operation Chopper, the first United States armed forces combat mission against the Viet Cong began on Jan. 12, 1962. Fifty years later, after the leadership of Vietnam veterans in Franklin and with the help of former Congressman Heath Shuler, President Obama issued a congressional proclamation declaring March 29, 2012, as Vietnam Veterans Memorial Day with the promise of memorials and remembrances to occur across the nation from 2012 to 2025.

It is estimated that nearly 60,000 service people lost their lives, including the nearly 1,600 now considered missing in action. Approximately nine million actively served during the Vietnam War era and it is estimated that about seven million are still living today. Seventy-nine crosses marked with the names of military members who lost their lives in Vietnam were displayed on the courthouse square beginning on Thursday. The crosses were on display throughout the weekend as a way of honoring the military members who gave the ultimate sacrifice during the conflict.

Macon County commissioner and Vietnam veteran Gary Shields opened the ceremony by welcoming the crowd and noting the importance Franklin and the local VVA Chapter #994 played in establishing Vietnam Veterans Day, which is recognized nationally.

“In 2008, our Vietnam Veteran’s Association 994, and some people in the association here in Franklin, approached Heath Shuler, who was our congressman at that time and asked for a resolution,” said Shields. “The resolution marks March 29th of each year as Vietnam Veterans Day.”

After an opening prayer from VVA Chaplain Ernie Riles and the National Anthem performed by Dwayne Cabe, whose brother Denis Cabe served in Vietnam, Franklin Mayor Bob Scott and Macon County Vice-Chair Ronnie Beale offered remarks on the significance of the day and the sacrifices made by both members of the military and their families.

Shields introduced Lt. Col. Ret. Thomas Pyle, a Vietnam Prisoner of War (POW). Pyle was a POW for six and a half years and said that without the support of his family and friends back home, facing the war and its challenges would have been impossible.

Tom Baker, Western Carolina University Veterans Resource Officer also addressed the crowd and commended Franklin for its never ending support of veterans and its work to ensure that veterans are able to transition to civilian life. Baker is part of a program at WCU that helps student veterans with classes after returning from war.

Shields also commended John Waldroop, president of the VVA Chapter #994. “Everyone know that without great leadership, you can’t accomplish anything,” said Shields. “We are able to have events like this because of the leadership we have in Johnny.”