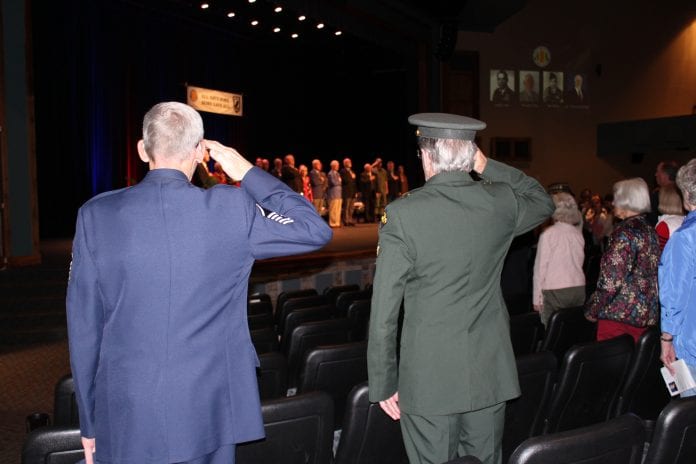 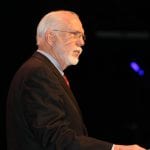 A ball of fire was rapidly consuming the fuel tanks of his Air Force F-105 supersonic fighter jet after a direct hit deep inside North Vietnamese territory on Sept. 4, 1966. Col. Thomas McNish was just 12 miles from Hanoi, the North Vietnamese capital, on a bombing raid to hit gasoline tanks at a MiG base during the Vietnam War. It was his 45th and last bombing mission.

With no hope of reaching friendly territory in Laos before ejecting, Col. McNish reacted instinctively, as trained. He ejected over hostile territory.

“If you delay making the decision, you may never get a second chance,” said the now Dr. McNish, explaining those moments. He was immediately captured on the ground by the North Vietnamese forces and would spend 2,373 days in captivity as a Prisoner of War (POW).

“I was the world’s greatest fighter pilot. I was never going to get shot down. I was never gonna get hurt. I was always going to come home, and I was going to be a hero,” Dr. McNish told about 150 attendees at the Smoky Mountain Center for the Performing Arts Saturday morning at the first of two Saturday events honoring Vietnam veterans in Franklin. Dr. McNish said he and his fellow POWs returned with their honor intact, but many of his fellow Vietnam veterans did not.

“After honorably serving their country, they came home to an ungrateful group of a part of our country, at least, who cursed them, spit on them, called them baby killers and every kind of insult you can imagine,” he said.

Dr. McNish is one of three living POWs in Macon County that were honored at the Vietnam Veterans Day event, which marked the 46th anniversary of the ending of the Vietnam War on March 29, 1973. The event was attended by dozens of veterans in uniform, family members and members of a community that has long welcomed veterans and especially veterans of the Vietnam War.

“Almost 10 percent of our population are veterans,” said Commissioner Ronnie Beale, who was one of several local representatives in attendance. “We had almost 1,500 who served in Vietnam from Macon County – which is extraordinary.” 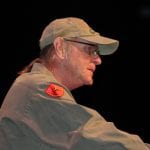 Local Vietnam Veterans of America (VVA) Chapter #994 president Billy Jones choked up on stage as he read the sobering statistics while standing near a battlefield cross – a pair of boots, upright rifle and helmet: 3 million members of the military served, more than 58,000 killed and 300,000 wounded. 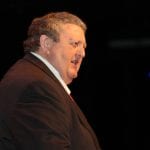 “They ask one thing, and that is to never forget,” Beale said in his remarks. With many veterans having died prematurely from service-related diseases, less than 700,000 Vietnam veterans are still alive today. 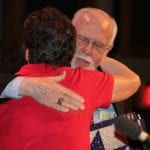 The Smoky Mountain Quilters Guild presented the three POWs, Keith Hall, Thomas Pyle, Dr. McNish and the widow of Franklin-born POW Nat Henry with “quilts of valor.” The hand-sewn, unique, American flag-emblazoned quilts are among the 1,040 quilts the local guild has given to veterans over the years. 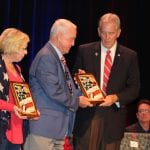 The men received plaques from the VVA and inscribed pens from the Board of Commissioners. Later that afternoon, Dr. McNish was honored with the dedication of a portion of Wayah Road in his name near his boyhood home where he grew up.

“He said the will to live overpowers everything. Nat would be proud today,” a tearful Becky Henry said of her local hero, who died in 2016.

“I wish our nation had more towns like Franklin, North Carolina,” said Hall, who recalled the painful reception many Vietnam veterans faced upon return from the conflict, and the welcome of Macon County.

“These plaques are really not about us, they’re about you,” said Pyle. “They’re about the values that your parents taught you and the values you’re teaching your children. That is what makes Macon County different.” 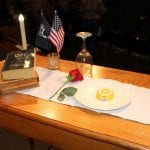 Five hundred and ninety-one Americans were captured during the war, of whom 566 were members of the military. Near the stage on Saturday was a table set for one. Vietnam veteran Ronnie Norton explained what each element of the “missing man table” for fallen, missing or imprisoned military service members symbolized: a single rose, the family and friends who keep the faith awaiting the return of the missing servicemember; a slice of lemon, the bitter fate of the missing; salt, the tears shed by waiting families; a lit candle, the light of hope that lives in hearts to light the way home.

“Over two-thirds of the people who went to Vietnam were volunteers, not drafted,” said local business leader Phil Drake, who did not serve himself but had many friends who did. “I am honored to honor the men who stood in harm’s way for me and my family.”

North Carolina State Sen. Jim Davis shook hands with each Vietnam veteran sitting in the front three rows on the left side of the auditorium before the start of the ceremony.

“It’s a privilege to be here to honor the service of these men and women, especially since Vietnam was controversial. But their service was not controversial,” he said.

Dr. McNish took his opportunity at the podium to present a less common view of the Vietnam War, that of a necessary war that directly contributed to the fall of the Berlin wall and the crumbling of the Soviet Union. He also echoed other speakers in noting that the modern practice of thanking veterans for their service is a reaction to the poor treatment Vietnam veterans received upon return home.

“I think the country is struggling now with trying to correct that error,” he said. Dr. McNish reflected on the 2012 designation of National Vietnam War Veterans Day and the certificate each veteran received thanking them for their service. 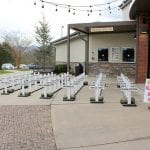 “Appreciated. Late, way late, but at least it was something. And that came along with this feeling that is now in our country to respect those in uniform and to thank them for their service,” he said. After reflecting on the black POW flag, and the faith he had in captivity that he would be rescued, the former Col. McNish ended his morning address with a resolute statement about the war from a proud veteran, “We stopped the advance of communism in Southeast Asia.”

Town moves toward transferring ownership of Mound to nonprofit