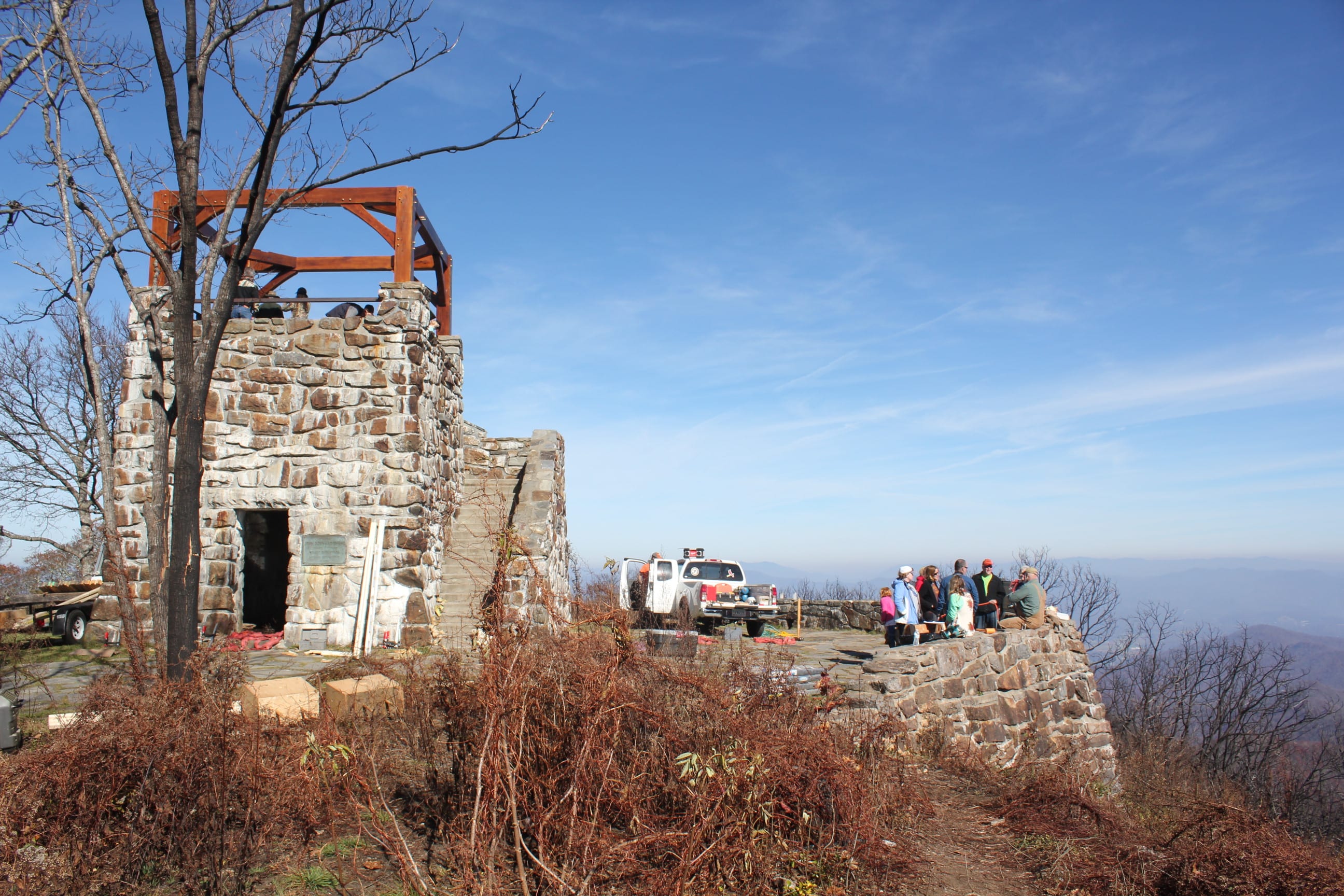 As thousands of acres of forests were ravaged by fires last October and November, Wayah Tower, along with the nearby historic Jones Cabin, were the first structures affected by the wildfires. Nearly a year to the day the Camp Branch Fire claimed the roof on the Wayah Bald Fire Tower, volunteers gathered to erect beams to support the new roof.

Jeff Johnson Timber Frames stepped up to volunteer to rebuild the fire tower roof and over the weekend was able to complete the first phase of the rebuilding project.

“Our staff had talked among themselves after the tower had burned and wanted to offer their services to rebuild it on their off time, which meant a huge savings on labor for construction and install and giving back to the community,” said Johnson. “We take great pride in our work and we wanted to

provide Macon County with the best structure we could possibly craft.”

The fire tower was first constructed in 1937, but the roof was later added by the U.S. Forest Service in 1983 during a remodel process.

Johnson said that his company’s cost for the project was $46,219.50; of that, roughly $12,000 was timber cost which was paid for by Williams Construction and the U.S. Forest Service.

Phase one of the project involved setting the principle post, setting the lower rafter and dragon plates and all the wind braces needed for the structure. Johnson and his crew are currently finishing rafters and are going through the trial fit up of those pieces. According to Johnson, he hopes to complete the entire timber frame system before Christmas.

Johnson is working with Williams Construction out of Robbinsville and Sanders Crane in Franklin to complete the project.

“Joe Sanders has always been gracious in donating his time in other community projects such as the veterans frame at the memorial park and the Chamber of Commerce frame at their old location,” said Johnson. “Joe is being compensated for the tower construction through Williams Construction in Robbinsville. “He will be helping us when we do the final raising for the roof system.”

Johnson said that rebuilding the fire tower is more than just fixing a structure. It is symbolic and is something he hopes inspires the entire region.

“2016 was a tragic year for many people in Western North Carolina and East Tennessee,” said Johnson. “The U.S. Forest Service did an excellent job in protecting property and lives here here in Western North Carolina.  We are very thankful for the opportunity to reconstruct this historic structure and we hope that the citizens not only of Macon County but everyone traveling to the mountains will enjoy for decades to come.”

Lost loved ones remembered on Day of the Dead