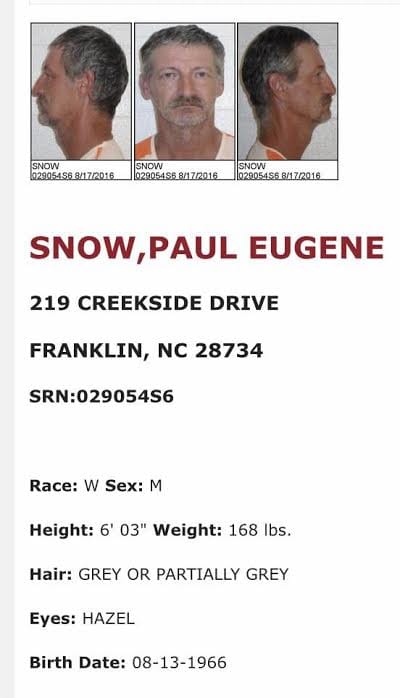 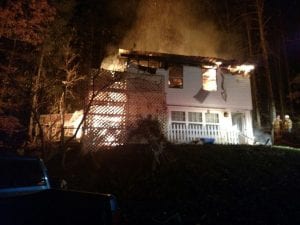 On Nov. 6, at approximately 12:19 a.m. a house fire was reported at 219 Creekside Drive of Macon County. Upon arrival, responding fire personnel found the home fully engulfed by fire with three occupants (two females and one male) missing along with a maroon 2002 Dodge pick up truck belonging to home owner Sunshine Snow. The vehicle was located unoccupied on Sloan Road hours after authorities first responded to the house fire.

During a search of the burned out home, detectives with the Macon County Sheriffs Office and State Bureau of Investigation located two bodies which were sent to Wake Forest for autopsy. At the conclusion of the autopsy the cause of death was determined.

The missing male was eventually identified and is being considered by law enforcement as a suspect. Paul Eugene Snow, 50, is the son of one of the females who resided in the home that burned. Positive identification of the two female victims has not been completed pending DNA verification. Paul Snow had been living at the residence up until the night the fire destroyed the home. He is also a registered sex offender who recently relocated to Macon County in recent months and registered under the address of where the fire occurred.

The investigation is ongoing and while Paul Snow initially cooperated with investigators, he is now unaccounted for. Felony warrants have been issued for Paul Snow for failing to change his address as required by all registered sex offender laws. Snow should be considered armed and dangerous. While it is possible he may be in the area, law enforcement has reason to believe he has fled the area and have entered him as Wanted into the national law enforcement data base at the National Crime Information Center (NCIC ).

Macon County Sheriff’s Department believes someone may have seen Snow walking in the area around the time of the fire. He is known to frequent a local bar and is also known to walk everywhere he goes wearing a small back pack that has flashing lights on the back portion of his pack. The MCSO believes it is possible that a citizen may have provided him a ride or someone may have had conversations with him not knowing the circumstances.