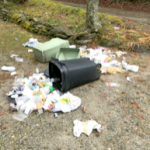 I have yet another photo that illustrates trash disposal problems that a small number of residents continue to generate.  Yes, I and the board might be viewed as garbage nazis by some with the passage of the ordinance requiring bear resistant toters.  But, we are not going to sit back and see Highlands literally get trashed by a few individuals who do not want to take responsibility for properly disposing the garbage that they generate.

The photo was taken last week in front of a residence on a main corridor in our town.  Probably someone came for the week or weekend and simply put out their garbage in these unsecured containers as they left. There is a black toter in the photo, but it is obviously not bear resistant.  I suspect these folks live back home in a development that would never tolerate what the photo depicts.  Why is it ok to do this in Highlands?  This irresponsible behavior is also no longer acceptable in Highlands.

So someone left town and triggered a mess for others to deal with.  I know they had been warned about the bear resistant toter ordinance. Notice the red warning tag in the upper right hand portion of the photo.

The ordinance was passed 16 months ago and was to go into effect on Aug. 1 of this year. The board had delayed ordinance enforcement for a year so folks would have time to purchase the toters.

In August, implementation of the ordinance was delayed because of back orders of toters at local stores.  All the back orders have now been filled and toters are in stock.   This fall residents that still didn’t have bear resistant toters had red tag warnings placed on their nonconforming trash cans.  At a recent meeting, the town board authorized the town manager and staff to begin enforcement of the ordinance when all the back order issues were resolved.  Therefore, beginning January 1st, the ordinance will go into full effect. Trash crews will not pick up garbage in nonconforming containers.  If a resident places garbage in nonconforming containers, a fine will be issued.

Some folks seem to be confused about storing of toters in storage containers that are next to the street.  Residents can roll the toter to the street curb on their collection day, or like me, place it in a storage container near the collection point.  One purpose for the toters requirement was to eliminate trash crews having to do repetitive lifting of trash cans. Workers were lifting 500 to 700 cans a day.  If a resident elects to construct a container for their toter, it needs to have a gate or open front where crews can roll the toter to the truck.  An enclosed four-sided container that makes crews have to lift the toter up and out of the structure defeats the goal of eliminating the continuous lifting of trash containers.

Again, I thank residents who have purchased toters.  Your participation and support has helped address what was a growing bear problem. It will also help the town maintain current residential collection rates.  Folks that do not comply with the ordinance can discuss their issues with our code enforcement police officer.

Heritage belongs to all of us