Victor Moraloza had served his one year (1969-70) as an out-of-high-school drafted soldier in the Vietnam War and was walking to the landing pad where the helicopter was going to pick him up for his journey home when he tripped a booby trap. Moraloza said he remembers not feeling any initial pain, due to shock, and hearing the helicopter approaching. Essentially, areas of his right side had been blown off and/or severely injured.

The veteran, who has been a resident of Franklin since the 1990s, experienced months in a hospital, multiple surgeries, and agonizing pain. Both knees were replaced, and he still walks with knee braces. Yet, the fit and former high school wrestling champion, who had eyes on an Olympic career before the War changed that, thrives in retirement as a carpenter and artist. While he received commendation medals, including two Purple Hearts and a Bronze Star, Moraloza said a great and unexpected reward came when he realized he had innate artistic talent.

“For years I couldn’t sleep more than two to three hours because of the pain,” he said, “and so I would get up in the middle of the night and start doing things. [In 2000] I took some copper [given to him by a friend] and because I had worked with iron for my job and welded, I just started working with the copper and making flowers and birds. No one in my family is artistic. But I was just able to do it. It just came natural. The energy just flowed.”

His home studio today is a copper garden of roses, lily pads, orchids, a flowering cactus, and more. Eagles – his favorite – are perched high, while a great blue heron stands impressively in one corner. Moraloza gleans much inspiration from nature.

But sometimes he just begins to bend and shape and allows creativity to take over. That is what happened when he achieved a piece that he said is something of a self portrait.

One of his most elaborate pieces, a wall art lighting fixture, sold for over $6,000. He was won many awards for the art, but said the greatest reward is when he knows someone is enjoying a piece. Currently, he is at work on a three-foot rooster for his daughter’s 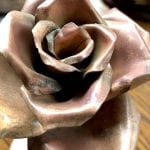 yard. “My son-in-law told me he’d always wanted one.”

Moraloza pointed out that even though a single sculpture might take him weeks or months to complete due to the complexity of the artistic process, “it’s peaceful and relaxing. And although I’ve been taking CBD oil since August and I am finally able to sleep at night and have not had to take pain medication – after 30 years of taking pain medication and not sleeping – concentrating my mind on the art helped me to not focus on the pain.”

At his fully-equipped workbench, he starts with flat sheets of copper and cuts them into shapes. Tools include a blowtorch, chisels, hammers, and pliers. Heat can add a hue and/or a metallic luster. He explained that copper sculpting is a multi-step process.

Some of the details require a light hand, “a softer touch,” he said.

He has made approximately 80 copper sculptures, small and large, since 2000. The ones that mean much to him are kept. Others have been sold or given to friends and family members. “I’m not interested in mass producing a piece for profit,” he said. “It’s not about the money. It’s about the quality and meaning of the work.”

When he is not working as an artist, Moraloza is a craftsman. Currently, he is in the process of using wormy chestnut in a master bedroom addition, which will inevitably be decorated with some of his copper art.

“These are the things I enjoy, and I do them because I love to do them!”