Mushrooms need moisture, and Western North Carolina’s Appalachian Mountains are considered a temperate rain forest with the average annual rain fall of anywhere between 30 and 100 inches. Thus, plenty of people in Macon County either forage for mushrooms or grow their own. In fact, many Saturday mornings at the Franklin Farmers Market, local growers display recent mushroom harvests – and plenty of outdoor educational classes from Macon County to Asheville teach safe mushroom foraging.

Joey Kyle, farm manager at Many Hands Peace Farm at The Mountain Retreat & Learning Center in Highlands, said the area’s environment is ideal for growing mushrooms because, “we clocked in at over 100 inches of rain in the last few years.” The farm primarily grows shitakes, wine cap, and oyster mushrooms.

Kyle is a certified permaculture designer and wild mushroom harvester. The Many Hands Peace Farm created a mushroom laboratory, partly funded by a 2017 Rotary Club of Highlands grant, as part of the farm’s overall food production and education programming.

“The edible mushrooms are used by our Mountain kitchen staff in meal preparation for guests and campers,” said Kyle, “with additional mushrooms sold locally to markets (in Cashiers and Highlands) and restaurants, depending on supply and demand.

​He explained that the educational aspect of the mushroom laboratory project involves teaching guests, campers, local visitors, farm apprentices, and staff about mushrooms and how they grow and reproduce.

“Visitors and staff can learn about the nutritional and health benefits mushrooms provide, other medicinal uses for mushrooms, how mushroom cultivation fosters environmental sustainability, recycling, and waste management,” he shared. “This is being done by reusing waste materials generated by The Mountain – cardboard boxes, paper, coffee grounds, paper filters, and plastic and wood containers to feed and grow the mushrooms.”

“Harvest your logs during the dormant season (November-February) to ensure the bark stays on the log,” she instructed. “When selecting logs make sure there are no chunks missing. Inoculate your logs [with shitake mushrooms spores – available online in individual ‘plugs’] in the time frame of February through the end of March. Stack your inoculated logs in a site that is 100% shaded in the woods but near a steam or branch for soaking to force a flush once the spawn run is complete (~18 months).”

Tradd Cotter, whose Mushroom Mountain organization is based in Easley, S.C., is considered an authority on mushroom growing and wrote a photography illustrated book, “Organic Mushroom Farming and Mycoremediation” that many use to learn to grow mushrooms. Another way to learn is to take a class.

Ronnie Cabe, who sells shitake mushrooms some Saturday mornings at the Franklin Farmer’s Market, said he first learned to grow mushrooms by taking a class at the N.C. Cooperative Extension – Macon County Center, and then he eventually taught classes. For a while, Cabe, who resides in Cowee on 200 acres, had mushrooms growing in 7,000 logs.

“I was selling to restaurants and at two farmer’s markets,” he said, pointing out that he has been growing shitakes for at least 10 years. “I kind of went berserk.” As he has gotten older, he said he has pared down his efforts to a manageable 2,500 logs and grows both shitakes and golden chanterelles.

“I enjoy growing mushrooms because there is no weeding,” said Cabe. “I would rather carry logs than pull weeds. To grow mushrooms, you mostly need trees and water and I’ve got both. There are four creeks on my property and I water the mushrooms with a gravity flow system.”

Cabe said that he enjoys eating his homegrown mushrooms and pointed out, “They’ve got almost as much protein as chicken or pork, so I sell a lot of them to vegans.”

He recommends storing shitakes in a paper bag, not plastic, and then in the vegetable bin of a refrigerator to make them last at least a week and sometimes up to two.

Bill Hodge, who also sells shitakes at the Franklin Farmer’s Market, grows them at his home in Otto and, like Cabe, learned at an extension office class and has also been growing them for about 10 years – but on a smaller scale, with about 200 logs.

“It’s just a way to make a little extra money,” he said, adding that he enjoys eating the fruits of his labor in spaghetti sauce, scrambled eggs, and sautéed with onions and garlic as a side to a steak.

Hodge also has a creek on his property where he soaks the inoculated logs for at least 24 hours to “initiate” the mushroom spawn to fruit and produce mushrooms. “I love watching the mushrooms pop out of the logs,” he said. “It’s rewarding. I would say the hardest part of growing mushrooms is just cutting the logs.”

Since his mushrooms are of a summer harvest variety, Hodge fruits at between 25-30 inoculated logs a weekly during the summer months of June through August and sometimes into September.

Asheville Fungai is one organization offering education regarding wild mushroom foraging with a warning: “While foraging for wild mushrooms is a lot of fun and very rewarding, please use extreme caution! There are many species that have look-a-likes. Having an experienced guide while learning is highly recommended.”

For example, a mushroom that may appear edible – especially for people who are used to eating grocery-store-bought button cap white mushrooms – is the destroying angel or Amanita ocreata, “an all-white innocent looking mushroom,” said Kyle. Destroying angel will cause liver, multi-organ failure and death. Another deadly wild area mushroom is the Galerina marginata, which he said “could be confused with the honey mushroom.” Two that will simply make a person sick are the siciner and the jack o’lantern.

“I like to teach respect and not fear,” said Kyle regarding worries over wild mushroom foraging. “Being with a good teacher until you know what to look for is better than a book.” But Kyle recommends newbies read and take with them on foraging hikes “A Field Guide to Mushrooms of the Carolinas.” “It’s a great book for our region,” he said.

Because of all the rain in recent years, the area has exploded with mushrooms, according to Kyle, who said he offers educational workshops and regular foraging tours. “Plus, we have a lot of untouched forests in this area, and the public has a right to pick mushrooms for personal consumption in national forests.” Primarily, he said chanterelles and chicken-of-the-wood are the “most prolific” edible mushrooms that he finds while foraging. “Finding edible mushrooms while hiking  is wonderful and an added benefit, and then to get home and make the best tasting gravy …”

Although Western North Carolina is home to an estimated 1,000 mushroom species, a few other sought-after edible wild mushrooms in and around Macon County include: lion’s mane, bear’s head, oysters, morels, and reishi. 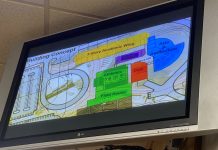 Attorney General to ‘get answers’ about HCA buyout