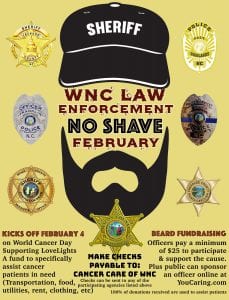 This Sunday, law enforcement agencies in Western North Carolina will be launching a “No Shave February” fundraiser to raise money for the Cancer Care of WNC LoveLights program in honor of World Cancer Day.

The LoveLights Program provides aid by paying electric bills, buying heating oil, providing local transportation if a patient does not have a way to get to an appointment, and supplying Wal-mart and Ingles gift cards for groceries and incidentals.

“On occasion, we have supported housing funding,” said Battle. “For example, we have paid a patient’s rent or mortgage to prevent a patient from being without a home. Often times the gift cards will allow the patient to buy groceries and gas which then allows them to afford a medication that they would not have been able to buy.”

Cancer Care of Western North Carolina, a Mission Health Systems affiliate, has locations all across WNC, including in Franklin and Sylva. In 2017, there were 2,000 patients served at Cancer Care of WNC’s Franklin office.

Last year, cancer patients across Western North Carolina were able to utilize the fund for whatever needs they had. According to Battle, in 2017, the program assisted 187 patients.

“There are limited resources in WNC, especially in our rural communities,” said Battle. “The LoveLights program offers an opportunity for the community to provide aid to WNC patients and families. This can be even more critical when coping with a challenging, chronic diagnosis.”

While the needs met by the LoveLights program are generally necessities such as food and transportation, because of members of the community and fundraisers such as the No Shave February fundraiser, other needs of families are able to be met.

“We helped a single mother with small children last Christmas by giving her enough Wal-Mart gift cards so she could buy gifts for her two girls,” said Battle. “We also provided Ingles gift cards so they could have Christmas dinner and paid her electric bill to prevent her power from being disconnected.”

In honor of World Cancer Day, participating WNC law enforcement agencies will allow their officers to grow a beard, for a fee, and are encouraging the community to also donate to the cause. Holland noted that 100 percent of the proceeds raised throughout February will be donated to the LoveLights program. The fundraiser was launched by Macon County Sheriff Robert Holland, and includes officers from Jackson, Macon, Swain, and Cherokee County Sheriff’s Departments as well as Sylva, Highlands, and Franklin Police Departments.

Battle noted that 100 percent of donations received by fundraisers and their contributions are used for patient assistance.

“The physicians and employees of Cancer Care of WNC are very active in supporting LoveLights; because we see the impact the LoveLoveLights fund has on our patient population in need,” said Battle.

Veteran’s Day event set to be a musical tribute