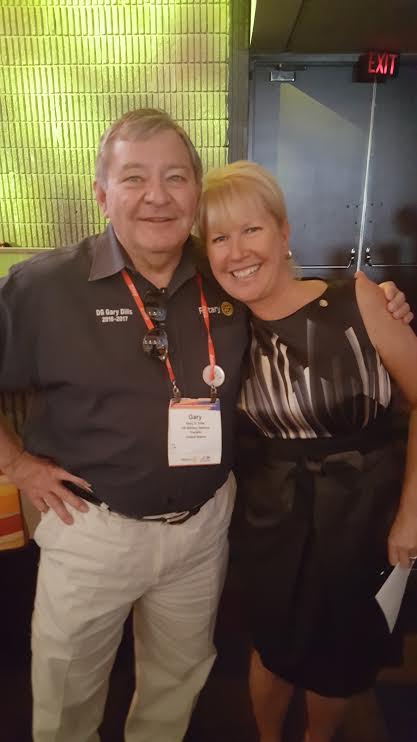 Rotarians from across the world gathered in Atlanta last week to celebrate the100th Anniversary of the Rotary Foundation. Rotary International District 7670 Governor Gary Dills of Franklin was recognized at the convention for his district having the highest participation rate in the world at Atlanta.

District 7670 covers the 22 counties of WNC with approximately 2,300 Rotarians in 49 clubs and three satellite clubs. The District also includes 49 Interact Clubs in high schools across the region including the Interact Club at Franklin High School. The District also sponsors 10 Rotaract Clubs in colleges and communities across the region including one in Highlands, one at Southwestern Community College (Macon Campus) and a brand new Rotaract Club at WCU.

More than 50 Macon County Rotarians were in Atlanta for the celebrations, with a total of 357 Rotations from Dills’ District 7670.  Dills’ district represented 16.2 percent of the 40,000 plus Rotarians from around the world to attend the conference.

“This is the first time so many WNC Rotarians have attended an international convention,” said Dills. “The last big district attendances were New Orleans and San Antonio and fewer than 100 attended.

The Rotary Foundation started in Atlanta in 1917 with one contribution of $26.50 and has grown to more than $1 billion while spending more than $3 billion doing good around the world.  Rotary has more than 1.2 million members in 35,000 clubs in almost 200 countries around the world.

During the conference in Atlanta, Rotary President John Germ and Bill Gates, co-chair of the Bill & Melinda Gates Foundation, announced a commitment of up to $450 million to support the eradication of polio, one of Rotary International’s founding principles.

To an audience of nearly 40,000 Rotary members attending the humanitarian organization’s annual convention, Rotary and the Bill & Melinda Gates Foundation renewed their longstanding support for ending polio – a paralyzing, life-altering scourge on the verge of becoming the second human disease ever to be eliminated. Rotary committed to raise $50 million per year over the next three years, with every dollar to be matched with two additional dollars from the Gates Foundation. This expanded agreement will translate into $450 million for polio eradication activities, including immunization and surveillance over the next three years. This critical funding helps ensure countries around the world remain polio-free and that polio is ended in the remaining three endemic countries: Afghanistan, Nigeria, and Pakistan.

“The vision of eradicating polio began with Rotary, and its support of that effort has been unwavering for more than 35 years,” said Gates. “Rotary’s commitment to raise $150 million over the next three years to end polio forever is a testament to the compassion, generosity, and kindness of more than a million Rotarians around the world.”

The global eradication of polio has been Rotary’s top priority since 1985. Through the Global Polio Eradication Initiative – a public-private partnership that includes Rotary, the Bill & Melinda Gates Foundation, the U.S. Centers for Disease Control and Prevention, the World Health Organization, and UNICEF – the incidence of polio has plummeted by more than 99.9 percent, from about 350,000 cases a year at the start of the initiative to just 37 cases in 2016.

Numbers are in: Impact of eclipse creates record revenue