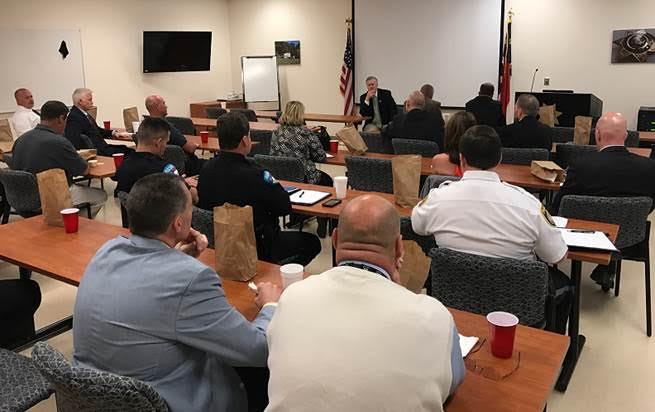 “I appreciate the opportunity for our WNC law enforcement leaders to come together to meet with our Congressman and for him to take time to hear and discuss the issues of concern,” said Macon County Sheriff Robert Holland. “It was obvious that drugs of all kind, legal and illegal, are the greatest threat every community currently is facing.  The epidemic we all are facing in each county has no face… it has no conscience… and there are no economic boundaries.  If one family member is lost because of addiction it’s one too many and to that family it is far greater than an epidemic.”

Current studies show that an average of four North Carolinians die from a medication or drug overdose every day. Additionally, an April 2016 study notes that of the worst cities in America for opioid abuse, North Carolina contains four of the top 20 cities. The growing concern around these figures led Meadows and law enforcement officials to discuss solutions over a meeting in Western North Carolina.

“The professionals closest to the problem are often the most well equipped to lead the charge in fixing it,” Rep. Meadows said, “and I truly believe Western North Carolina has the best law enforcement officials in the country. The opioid epidemic in our community is substantial, but we are committed to bringing the situation under control and today’s meeting was a crucial step. I want to thank our NC11 law enforcement officers for their eager willingness to discuss the issue and for their always steadfast leadership in our community.”

Sheriff Holland said Meadows’ discussion is a great step forward in connecting, local, state, and federal resources to combat the epidemic. “Many of our Local, State and Federal leaders understand that there needs to be more emphasis placed on treatment facilities,” said Holland. “While it comes down to funding, the fact of the matter is someone has to make available treatment for drug addiction a priority to make it happen.  Not every addict is ready for treatment… but as we have seen with several of our inmates the first time they ever ask for help is after sitting in jail a while and when for the first time in many months or even years their minds are clear and sober and they finally ask for help.  I believe in holding people accountable for their actions but at the same time I also believe in providing an individual a path to sobriety with the hopes it would lead to better decisions and a safer community.  Ultimately providing treatment when appropriate will save money instead of our current system for addicts… a revolving door into the local jails, the place that doesn’t need to be the only local detox center.”

Women recognized as history trail is launched this Saturday

At a Contra Dance ‘the swing is the thing’ and the...