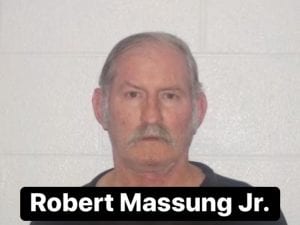 On the afternoon of Friday, March 13, at approximately 2:37 p.m., deputies with the Macon County Sheriff’s Office (MCSO) responded to the scene of a shooting at 290 Oak Hill Road. Upon arrival, the responding deputies located two male individuals and a female. The female was suffering from a gunshot wound. Deputies began to adminster first aid, but the woman died shortly after the deputies arrived on scene. Robert Massung Jr. of 164 Oak Hill Road, Franklin has been charged with felony voluntary manslaughter in the death of victim Kathleen Couch Dills, 47, of Franklin.

An investigation immediately ensued and the preliminary findings released. Multiple interviews were conducted and search warrants were executed in relation to this incident. Massung had suspected someone had been breaking into a vacant home in his neighborhood and went to the home to investigate further with another neighbor. Once at the vacant home, Massung entered the home without permission. After entering the home Massung fired a 9mm which did strike Kathleen Dills at least once. Another female inside the home immediately fled the residence. The second female was last seen going through a wooded area to a blue Ford Mustang and driving away. That female was later identified and located by detectives. The female was subsequently interviewed at the MCSO where she confirmed she had been at the home with the deceased female and confirmed that she was her sister.

The MCSO were assisted by the NC State Bureau of Investigation as well as District Attorney Ashley Welch. The Medical Examiner was also at the crime scene and an autopsy was scheduled to be performed in Winston Salem Monday.

While Massung is currently charged with felony voluntary manslaughter, the investigation continues and additional charges are possible. Massung remains in the Macon County Detention Center where bond has been set at $200,000.

Detectives are not looking for any additional suspects in this incident at this stage of the investigation. No other arrests are pending at this time.

Friends of the Library celebrates half century