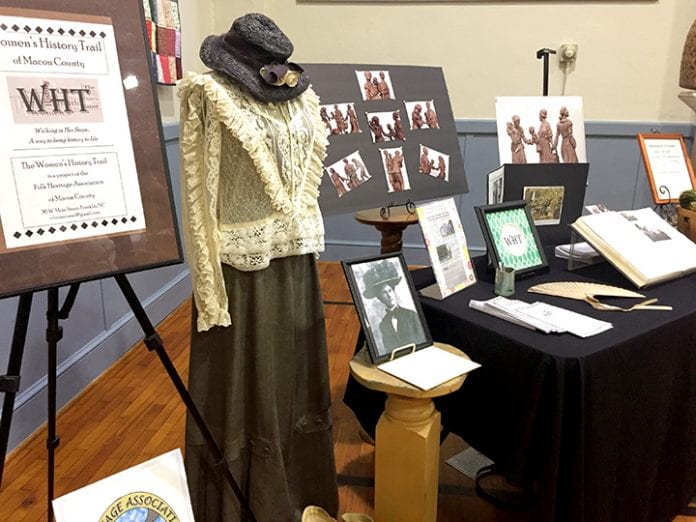 Women like Agnes Zachary Higgins, Eloise Griffin Frank Potts, and Arrah Belle Johnson are not in history books. They and their accomplishments may have been forgotten except for a two-year initiative to establish a Women’s History Walk, spearheaded by Barbara McRae, local historian and vice mayor of the Town of Franklin. The trail opens to the public Saturday, Oct. 27, at an official launch celebration held at 1 p.m. at the town’s gazebo on Main Street. The free and open-to-the-public event includes a “Walk in Her Steps: A Way to Bring History to Life” tours that visit the first nine stops along the trail, a trail booklet, light refreshments, and local musical talent. Someone from the project will be on hand to answer questions at each site.

The Women’s History Trail Leadership Team, charged with planning, researching, and sorting out details – such as the bronze plaques designating each site – includes, besides McRae, Mary Polanski, Marty Greeble, Anne Hyder, Claire Suminski, Susan Ervin, Theresa Ramsey, and Laura Brooks. The project is part of the Folk Heritage Association of Macon County, based in Franklin.

McRae pointed out that Franklin, despite its label as a small town, includes historically significant women who made important contributions to the town and county. Potts was the first woman mayor of the town in the early 1960s. McRae said two of her great granddaughters may attend Saturday’s Women’s History Trail launch. Higgins was a musician, playing piano for silent films; she was also the first woman chosen for jury duty in Macon County in 1947.

Blush, a new women’s boutique on Main Street, was the site of Main Street Milliners, managed by Lilly Moore in the early 1900s. Women’s hats were worn during the 19th and 20th centuries for practical and fashionable reasons. Moore, whose father owned the store, set the tone for hat fashions in Franklin, even designing and making some of the hats for the shop. Through research, the team for Women’s History Trail discovered an early postcard, circa 1908, showing a display of hats in the store’s window. Blush co-owners Brittany Murphy and Erin Moffitt said they plan on Saturday to have vintage hats on display and plenty of varying price point hats to purchase. They are both excited that the site is on the Women’s History Trail.

Perhaps one of the most noteworthy women in Franklin was Johnson, who – ironically – was the first owner of the home where McRae has resided since the 1990s. Johnson, born 1876, was the first female editor of The Franklin Press (from 1939 to 1944) and, according to McRae, spent much of her life’s savings to eventually purchase the newspaper. Coincidentally, McRae is also a past editor of The Franklin Press. Johnson rallied behind local causes associated with World War II. And, she was also one of only three percent of American women at the time to hold a college degree, explained McRae.

“She passed in 1944 in the home,” said McRae, whose home now displays a bronze plaque honoring Johnson. “This was her dream home she had built in 1939.”

Other women being honored on the Women’s History Trail represent education, entrepreneurship, the arts, social work, and much more.

The Leadership Team conveys, “Throughout Macon County’s history, wives, mothers, and daughters maintained homes, farms, businesses, cared for children and the infirmed, provided family income, initiated social reform, inspired creative endeavors, achieved artistic brilliance, and sometimes became heroines. Women’s lives have been filled with rich experiences, and their daily contributions are an invaluable part of our history that has too often been overlooked.”

Added Polanski, co-leader of the project, “Women traditionally stayed in the background and kept their names out of the paper. Written history has largely ignored them, but they made a significant difference to the world they lived in. We want to bring that to light.”

More sites for the Women’s History Trail will be added in the future, with the keystone of the initiative being the yet-to-be-completed life-size sculpture featuring three matriarchal figures: a white woman, an African American woman, and a Cherokee woman whose names are Timoxena Siler Sloan, Sally (last name unknown), and Rebecca Morris. Cashiers-based world-renown figurative sculptor, Wesley Wofford, has been commissioned to convey the three women in a dramatic, realistic, seven-foot bronze sculpture that will be positioned, upon completion, near the Nikwasi Mound in Franklin.

The Women’s History Trail Team will launch another segment of the Trail in the near future. “Though the initial sites cluster in Franklin, we expect it to expand to other sites in the county because there are so many great stories to be told,” Polanski said.