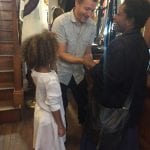 In the Macon County Historical Museum one weekday afternoon, Figurative Sculptor Wesley Wofford fitted 19th century period clothing onto two “models” and posed them for photos. The Cashiers-based sculptor is in the planning stages of a commission piece for an out-of-state installment. However, Wofford is also the chosen sculptor for the much anticipated Women’s History Trail’s main entryway piece.

Career journalist and historian Barbara McRae, who is vice mayor of the Town of Franklin and an organizer for the Women’s History Trail, appealed to the Macon County Commissioners on Sept. 11, to authorize a letter of support for an up to $50,000 Z. Smith Reynolds Grant that specifically supports public sculptures that tell a historical story supporting factions of the population that are under supported.

“The trail is about focusing on the contributions of women in Macon County,” said McRae. “We fell in love with a story we learned about through our research that includes three matriarchal figures: a white woman, an African American woman, and a Cherokee woman.” Their names are Timoxena Siler Sloan, Sally (last name unknown), and Rebecca Morris. 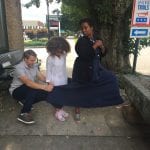 To draw attention to Western North Carolina women – who are mostly overlooked in history books – the Women’s History Trail leadership group of the Folk Heritage Association of Macon County, of which McRae is member, commissioned Wofford to convey the three women in a dramatic, realistic, seven-foot bronze sculpture. The sculpture process will take at least two years.

“He’s a fantastic sculptor and we are thrilled to have secured him,” said McRae. “It will be a long process for the sculpture to be completed and will be costly, but we’re moving in that direction.”

The reason it will take so long for Wofford to complete the Women’s History Trail entry sculpture of the three women is not only because of funding but also because he is meticulous in his attention to historical detail. He often peruses the Macon County Historical Museum when working on a piece. Creating the sculpture is a laborious time-consuming process, including initial meetings and discussions, illustrations and/or photographs, small-scale models called maquettes, more refined versions, a full-scale model, and ultimately the final bronzed product. The process is so multifaceted that Wofford’s lectures on the subject take an hour or more. “I will sculpt for months on the small ones and the large ones. I will sculpt, refine, sculpt, refine … over and over again.”

He points out that the final bronzed sculpture will be “fairly indestructible” when finished. “It will be around for a long time. It will be in Franklin to stay.”

“It’s something that people here will be able to enjoy for generations. And the fact that it is a sculpture of real people, but symbolic at the same time, means it will be loaded with meaning.”

Wofford is thrilled to have been chosen for the Women’s History Trail piece because it offers a local opportunity to present his work. The project is currently in the maquette stage. Eventually, he will find models for the sculpture and begin to “take it to the next level” with wardrobe, posing, and a third-scale model. What is especially thrilling for him and others working on the Women’s History Trail is that there are ancestors of Timoxena Siler Sloan and Rebecca Morris living in the area that may serve as models for the final sculpture.

He describes his role in the Women’s History Trail as “serendipitous,” pointing out that the sculpture will be one part of the “narrative that connects women’s contributions to society and history.”

He adds, “I do projects all over the country, but it’s rare I have a geographical or personal connection. So much sculpture emphasis is put on white military generals, but this is part of a movement. I think of myself as a translator, and I love the beauty of what this is saying. Despite our differences, we all need to work together. It’s inspiring and I’m honored to be a part of it.”

Wofford moved to Cashiers in 2003 with his wife, Odyssey, who is also studio director. Wofford  served as a board member at The Bascom for three years. He now serves on the board of and is a fellow for the National Sculpture Society in New York City. His resume regarding creative talent is impressive. Interest in advanced translucent silicones led him to develop his own formulas and techniques, which in turn projected him into the Hollywood scene and specifically the makeup effects industry. “What I’ve done for film is like portrait sculpture, but doing it on a live face … transforming their look,” he said.

He has worked on more than 75 motion pictures and television shows, including, “A Beautiful Mind,” “Hannibal,” “Batman and Robin,” “The Rock,” and “Collateral.”  He has personally worked with such actors as Robert De Niro, Tom Cruise, Robin Williams, Julia Roberts, Will Smith, Chow Yun-Fat, and Russell Crowe.  Plus, Wofford has been featured in numerous magazine articles and television coverage and has received awards, including the coveted Emmy from the Academy of Television Arts and Sciences as well as a technical achievement Academy Award for seven years of work in film.

Wofford’s sculptures are on public display locally, such as at Wade Hampton Golf Club in Cashiers, as well as throughout the U.S., including at the Emmy Hall of Fame in North Hollywood, Calif. His work has been published and exhibited nationwide, most recently in “A Blessing of Animals,” first in New York City last year and then in Naples, Fla., earlier this year.

One day last month, Wofford met 8-year-old Aspen Applewhite and her dance instructor, Jayda Bryson, of Betsy’s School of Dance, who had agreed to be his models for the out-of-state commissioned piece. After Museum Curator Robert Shook directed Wofford to appropriate period costumes, and the model pair were posed and photographed. Applewhite’s mother, Crystal Coffey, assisted by holding up her daughter’s hem as if she is in motion.

“He’s [Wofford] is so detailed in his approach to these sculptures,” said Shook. “He has borrowed items from the museum in the past because he wants to get it right.”

McRae said that although a date for the future unveiling of the Women’s History Trail sculpture is yet to be determined, she and others are enthusiastic about what is transpiring at the ancient Nikwasi Mound site, where the sculpture will be located and where history is intersecting in so many ways.