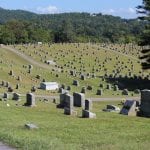 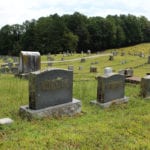 April showers bring May flowers… and grass, which has to be mowed, a problem for Franklin Cemetery Association, which owns Woodlawn Cemetery in Franklin. For the last few years, the public, and family members who have loved ones buried at the cemetery have battled with the association over the maintenance and upkeep of the cemetery property.

A decline in the purchase of burial plots and a reduced percentage of revenue generated by the perpetual care, has left trustees of the public cemetery without the money needed to keep the grass mowed on the property.

Richard Jones, who has served on the Franklin Cemetery board since 1972 addressed the Franklin Town Council on Monday night, once again pleading for help.

The Woodlawn Cemetery area on the south side of old Murphy Road contains approximately 26 acres. Of that, all except approximately 6.89 acres, which has not yet been developed and/or has not been sold for grave sites, is in the actual cemetery burial area. There have been 1,406.25 four-grave lots sold, which results in 5,625 individual gravesites. In the columbarium site, 63 niches have been sold and two lots in the mausoleum area have been sold. Approximately 450 grave spaces are still remaining and available for sale. The cemetery also owns two separate tracts containing 11.5 acres on the north side of old Murphy Road. That tract does have a house on one portion and both portions are encumbered with purchase money mortgages and/or bank loans. Jones said that the excess properties are still being eyed as a possible solution to the problem and may be sold in the future to generate revenue.

Jones said that from November to now, the association hasn’t had to pay anyone to mow it, which usually cost anywhere from $2,500 to $4,500 a month. The association only has $7,000 of revenue available, which won’t even keep the cemetery mowed for a full two months. While it has been policy in the past not to allow families to mow their own burial plots, in order to keep the cemetery uniform, Jones said that starting last year, they association changed their policy to allow loved ones to mow and upkeep the area around grave sites to help with maintenance.

The problem has been has been brought to the attention of government leaders for the last several years and is once again a topic of discussion. In 2015, the association approached both the town and county asking for help maintaining the property by having them completely assume responsibility, but both declined. Macon County, which is home to more than 80 cemeteries and graveyards noted that if they cared for one, they would have to care for them all and it wasn’t financially feasible for taxpayers to do so.

Jones, along with board member Jim Shope informed the town council that this year, they plan to apply for funding from both the town and county through each entity’s non-profit funding pool. Jones said that they would need $10,000 from the town and another $10,000 from the county to add to the $7,000 they currently have just to mow the property this year.

While Jones and Shope said they would need $10,000 from both agencies, the town funding pool limits requests to $5,000 and due to the volume of requests, rarely grants the full amount requested. The county allowed for grant requests up to $10,000 but has historically only allowed the full amount requested to two agencies on a recurring basis, REACH of Macon County and KIDS Place.

Town of Franklin to look at beautification, parking issues on Main...