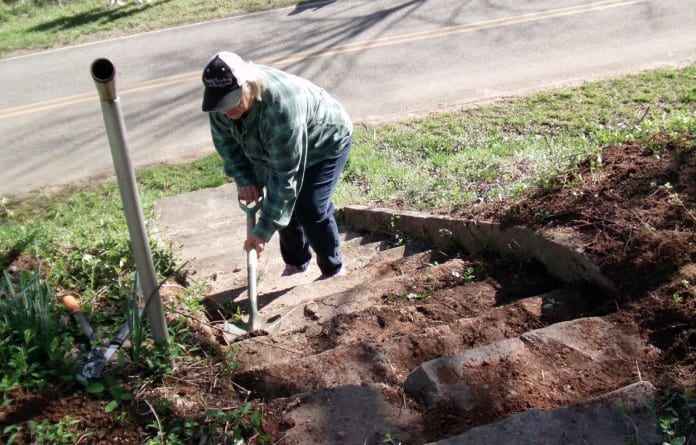 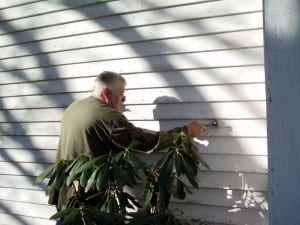 The crew that worked on the Salem Church on Saturday, April 2, was a friendly bunch. There was good natured ribbing going on while people cleared the steps, scraped paint, swept the walkway and clipped plants. David Awtrey turned to his wife, Jeannette, handed her the clippers and said she needed to cut back the shrubs in front of the church. “It’s not the right time to do it,” she said. David replied, “We gotta paint. If you’re not gonna do it, I will.” At which point she took the clippers with a look and got to work, carefully trimming the least amount possible but enough to give them room to paint. Twenty people showed up to work and 103 volunteer hours were invested that day.

Many discussions ensued about how to approach the structural elements of the repairs and the number of projects involved in restoring the old church. In fact, there were a lot of firsts.

The ramp is going to have to be rebuilt and it’s in the way of working on that side of the church. They decided to do the ramp on Saturday because they had all the labor and tools necessary to accomplish the project.

Many people skilled in construction are donating their time to creating the community building that they envision. Bill Bryson reported his analysis of the work to be done at the Cullasaja Community Association Meeting held on Tuesday, April 5. He agreed with Steven Bryson that the floor joist is the number one priority. He recommended sandblasting the outside of the building and fixing the interior walls. A building committee of Steven Bryson, David Awtrey, Michael Bryson, and Jeff Bryson was formed. The committee plans to meet on April 23. A fundraising committee was also formed last week, consisting of Becky Bryson, Angie Stone and Jackie Awtrey. Someone in the community has already offered to buy the paint for the building’s exterior.

“Can’t you just picture a wedding in there,” said Jeannette Awtrey, looking in from the main doorway down the length of the church. “Maybe someone can renew their wedding vows,” she added.

“I just sit up there on that porch and there’s not a prettier view anywhere,” said Jeannette Awtrey, when talking about her home in Cullasaja. “I look at the cattle, horses, the ducks in Becky’s Pond, the wild turkeys, and I just don’t have any desire to leave. I don’t even go into town hardly.”

The next Cullasaja Community Association meeting will be held at the Cullasaja Fire Department Tuesday, May 10, at 7 p.m., for all who are interested.

Safe Kids warns of danger to kids left in a hot...