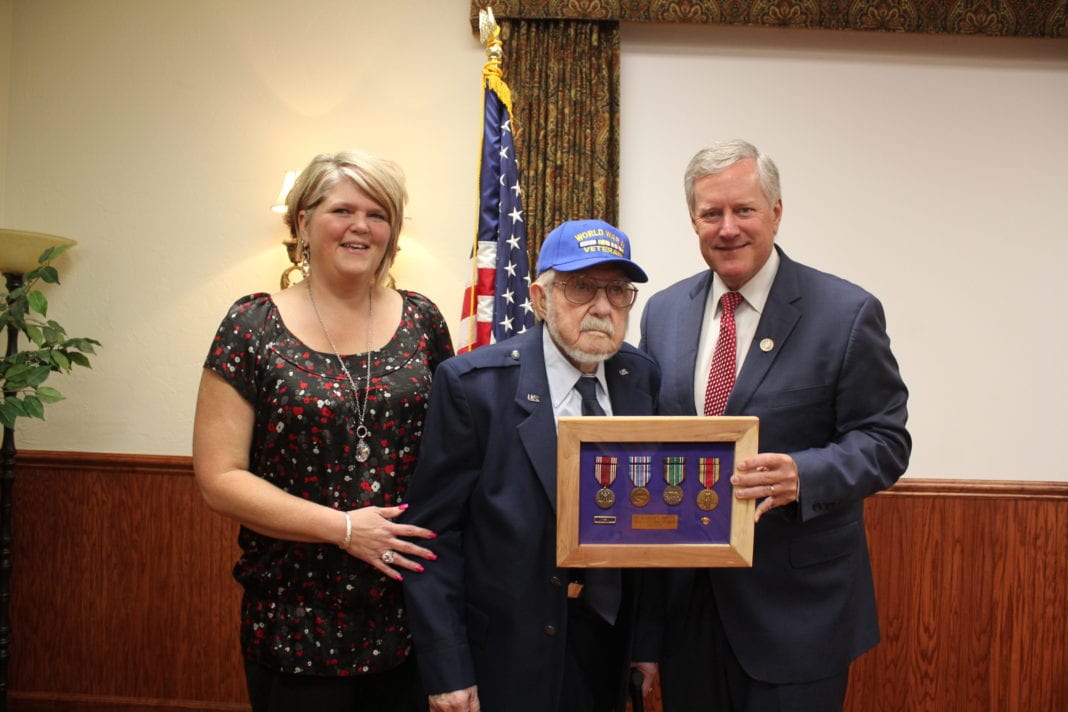 The meeting room at the Boiler Room Steakhouse was standing room only Wednesday morning to honor Army veteran Herbert Simmons. Simmons is the last remaining soldier from his camp of more than 300. He was deployed for World War II on the fourth day of the war and during his tenure in the Army, served in five different campaigns. Simmons served from 1942-1945 in the Army Air Corps with the 9th Air Force of the 81st Fighter Squadron.

Simmons was born in Iowa but has lived in Macon County for the last 26 years.

Congressman Mark Meadows was in town Wednesday and along with a host of family, friends and fellow veterans, honored Simmons  – at 95 years young – with medals for his service that were long overdue.

“These medals should have been given to you long ago, but I am honored and humbled to be able to give them to you today,” Meadows said while awarding Simmons with a shadow box featuring the medals. “I can’t thank you enough for your service to our country. As part of the Greatest Generation, putting service above yourself, I think we can all stand to learn a thing or two from people like you.”

In addition to Simmons, Meadows thanked Simmons’ bride of 71-years, Norma. A mutual friend had suggested to Norma during the war that she should write to Simmons and she said she would only agree if he wrote her first. So Simmons sent her a letter and before ever meeting face-to-face, they wrote letters throughout his service. Shortly after Simmons returned home from WWII the couple was wed and have been happily married ever since. Congressman Meadows said that those who serve are only able to do so because of the strong support they have back at home and thanked Norma for her support and encouragement.