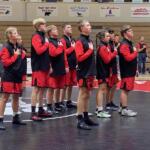 Lady Panthers continue to have quality individual performances, while as a team improvement has been steady throughout the season. On Jan. 10, they fell to the Maroon Devils of Swain County, 36-18. In the 126-lb. weight class, Stephanie Ortiz won over Brianna Wesley “by fall” (a wrestling point-total term) and Abby Carpenter, wrestling at 132, won over Erika Wachacha, also by fall. In the 138 category, Jasmin Valencia won over Tasia Neadeau, again by fall, and rounded out FHS scoring. Carpenter also recently won two Most Outstanding Wrestler awards in back-to-back meets to start the year.

Due to the close proximity of two recent meets, including one at Liberty University, only half of the team traveled to a mid-week meet at Swain County. Still, the Panthers gained two new state qualified runners. With sophomore Talon Smith in the high jump and junior Elijah Cochran in the 300 meter, FHS now has 33 total qualified positions for post-season events.

Coach Matt Harlfinger pointed out, “Last year we had 11 total through the whole season and we still have three meets to go.”

Additionally, from the Swain meet, Cochran also broke the school record in the 300m with a 36.10 time. Senior Cal Drake broke the indoor track high jump record at 6 ft. 2 in., and the indoor pole vault record was broken by senior Blake Cassada, with a jump of 14 ft. The meet also saw numerous personal bests from other members of the team. The Panthers competed again at Swain County on Wednesday, Jan. 18. 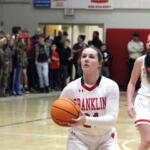 FHS hosted East Henderson Tuesday night, Jan. 17 for three basketball games, with the junior varsity (JV) girls not playing. Both the JV boys and varsity girls had resounding wins – the boys beating the Eagles 48-22 and the varsity girls’ victory by an even larger margin, 64-17. But the last game of the night was by far the closest. The Panthers found themselves down by 15 points at half time and still trailed by 12 with just over three minutes left in the third period. They rallied to tie at 51 and the game went to overtime where Franklin prevailed 59-57. The men’s varsity win streak and record in conference now both stand at 7-0.

With their most recent home game, FHS’ basketball program continues to shine in conference play for the season. The varsity men have a seven-game win streak following the East Henderson win, and lead 3A Conference 54 at 7-0, with West Henderson second and North Henderson in third place.

The Panthers have one more on their current home stand, against Tuscola Jan. 20. Then it is on the road to play at Pisgah and North Henderson before returning home for Senior Night, Jan. 31, versus Smoky Mountain.

The last conference game will be at West Henderson to close out the regular season. Senior center Cal Drake continues to set the pace, averaging nearly 19 points per game (ppg) and leads in several other statistical categories. Additionally, senior guard Josh Zoellner leads the team in assists, while senior forward Kehler Lamb averages just under three steals per game.

The varsity women also have a win streak, at five games currently, after their victory over East Henderson.

On the junior varsity side, the boys extended their winning streak on Tuesday to six and the girls are likewise undefeated in their last five games after a resounding 40-9 victory over Swain County, which followed a much closer win over the Falcons of West Henderson, 29-21 on Jan. 10.

With its Jan. 13 meet at Asheville canceled due to inclement weather, the FHS swim team hosted a three-school meet at the Franklin Health & Fitness Center on Jan. 14. In addition to the host Panthers, the Highlands Highlanders, and Smoky Mountain Mustangs swim teams competed in 22 scheduled events.

FHS fared well against the reduced number of participants and continues to dominate within Mountain 7 as the program heads toward conference and regional competitions. The total combined team score was 362, with the women and men each scoring 181 points. To put the win in better perspective, the Mustangs’ combined score was 132, and the Highlanders 106.

Regarding standings within the 3A West, which is where FHS is slotted for swimming/diving, their positioning is not as lofty. Individually, freshman Jonah Brant is second in the 1m-6 diving category. Otherwise, the highest team ranking is the girls 200 Free Relay where the Panthers are ranked 7th.

Next is the conference meet, scheduled for Jan. 21 at the Waynesville Recreation Center, beginning at 11 a.m.Wrestling improves; track setting records; men’s hoops in first place

Women’s History Trail project to place plaques at sites around...