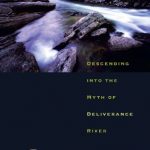 Because of the river growing popularity after “Deliverance,” John Lane, a professor of English and environmental studies at South Carolina’s Wofford College, decided that he needed to write a book that spotlighted the history, cultural significance, and conservation aspects of the river.

Lane’s goal for the book was to search for the “real Chattooga … truths that reside somewhere in the river’s rapids, along its shores, or in its travelers’ hearts.” As he explained during the Sept. 29 book club appearance, Lane attempted in the writing of “Chattooga” to “balance the dark, indifferent mythical river of ‘Deliverance’ against the Chattooga known to locals and to the outdoors enthusiasts who first mastered its treacherous vortices and hydraulics. Starting at its headwaters, I try to lead readers down the river and through its complex history to its current status as a National Wild and Scenic River.” His goal, as he wrapped up the book, was to leave readers “still fully possessed by the Chattooga’s mystery, yet better informed …”

“I embarked on writing Chattooga because I loved the river and I was a paddler,” he added. “I was also fascinated with James Dickey and how the real Chattooga river intersected with his imaginary Cahulawassee River in the novel ‘Deliverance.’”

Lane told participants of the virtual book club that he spent several years writing the book. “It’s a personal narrative, so I had to have contact with the actual river. Much of this time was spent traveling back and forth to paddle on the river in all seasons.”

Before writing each section of the book, Lane would paddle or hike along a section of the river and then stop to take notes, which included his reflections. He then created a narrative from the notes when he returned home, and the writings were eventually revised and expanded until they became “Chattooga.”

Even though the movie, ‘Deliverance,’ is almost 50 years old, Lane believes “Chattooga” continues to be a timely read due to “a sense of the power that comes from a personal experience with the river. It’s one of the most beautiful, magical rivers.”

Women recognized as history trail is launched this Saturday