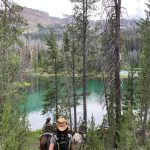 Despite being lifelong equestrians, a group from Franklin was challenged by an early July horseback excursion into the Teton wilderness of Wyoming. Due to a local connection with a family member who is a pack-trip guide at the almost 100-year-old Triangle X Ranch  just outside Jackson Hole, Wy., I was asked to join what promised to be a “trip of a lifetime.”

The group of seven, six of my family members and one friend, had to sign detailed waivers specifying “hold harmless” details regarding every imaginable accident scenario involving wild animals, weather, unforeseen dilemmas, etc., but we also had to state our level of horseback riding experience. All in the group had been in the saddle since childhood, so we were confident we could handle the planned five-day horseback riding excursion that left from a trailhead just outside Grand Teton National Park and ventured 20 miles to base-camp location in the Teton Wilderness.

At about 14.5 hands [equine height measurement – about 58 inches)], my leopard Appaloosa horse was the shortest of the bunch. A few of the horses were draft or Friesian mixes, meaning they were tall and wide, and one horse was a trained mustang. The others were quarter horse mixes and paints. And then the guide packed and pulled along another five large mules with our bags and miscellaneous items. Two other guides, including the cook, had ventured into the wilderness alone earlier that morning – at about 5 a.m. – to take supplies of food and other sundries that we would need during our time in the middle of nowhere. 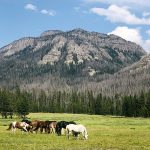 While the ride started out sedate enough, meandering from a corral and through a lengthy campground, we quickly climbed a hill and before anyone had a chance to begin to navigate the narrow, rugged trail, we crested an apex overlooking the Buffalo River at least 1,000 feet below. The path turned sharply to the right so that it appeared, from just below the apex, that the trail disappeared over the cliff. We proceeded to ride along a ridge that descended straight down on one side of the path, which was just wide enough for the horses and mules to step. It was at this high point that we collectively realized this was going to be no ordinary horseback ride. Among the group, we had spent years showing, raising, training, and even racing horses. But what we encountered during that recent summer trip tested our mettle.

We ventured within tight passageways of tiny canyons, dense, through fragrant fir forests, and over arid, almost desert-like terrain. Resplendent and unexpected were wildflowers of every shape and hue. And when we found ourselves in the eerie and charred remains of a 20-years-ago burned landscape, the juxtaposition of the vibrant floral colors and the coal black toothpick trees was other-worldly.

After almost eight hours of riding, we entered the base camp: an expansive and lush Edenesque meadow with a hillside that swept up and up on one side and on the other the Buffalo River and the solid rock Pentagraph Mountain, likened to another impressive rock mountain, Devils Tower in Wyoming, which was the very first official United States National Monument. Pentagraph appeared to be chiseled on all its sides and then lopped off to create a flat top. Instead of July 4th fireworks, we witnessed reverently a rainbow form over the stone precipice. 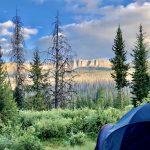 After we peeled ourselves out of the saddle and attempted to stand on our aching legs, we learned that the base camp was at 9,800 feet elevation. Tents were already spread out in private spots among willowy bushes and along a natural spring stream. And a large canvas tarp covered the “kitchen” and eating area.

We freshened by the stream, refilled our filter water bottles, housed belongings in our tent, and were treated to the first of many semi-gourmet meals that were a far cry from the pork and beans we expected so far from civilization. And, despite the knowledge that we were inhabiting temporarily the habitat of grizzly bears, timber wolves, moose, elk, and other large creatures (although the guides assured us they “usually” keep to even higher elevations during summer months) most of us slept exhaustedly that first night.

Perhaps after the first grueling day of horseback riding, we all thought privately that we would not want to get back on a horse until it was time to pack back out. However, the guides had us up early and, after a hearty breakfast, we were back in the saddle and heading toward Buffalo River, which we forded, and around Pentagraph Mountain. As we had the day before, we traveled through every imaginable geological landscape – from high-grass, natural fields, where we saw a mule deer bedded, to a barren hillside of large lava boulders to vertical forests of downed trees that we had to navigate over and around. We were “off trail,” but what the guide eventually directed us to – as cliché as it may sound – literally took our breath away. Another 1,000-2,000 feet higher than our base camp and tucked behind thick Fraser fir trees was a brilliant aqua glacier lake. Immediately, we realized that it was so pristine that we could see clearly large schools of rainbow and cutthroat trout.

Just after we tied our horses to trees, a bald eagle soared down the middle of the lake and perched uninhibited to watch us. Another eagle glided above the lake after the first one lost interest. With compact poles, some of the riders began fishing and quickly caught large trout – which were taken back in saddle bags for the evening meal.

After several hours of enjoying the almost ethereal setting, we braved the steep downhill descent and experienced some precarious events – such as my horse bolting down the mountain because the horse behind me jumped a log overzealously and landed on my horse’s haunches. For a few split seconds I was hanging on the side of my saddle, but I managed to strain myself upright and pull the horse to a halt behind the rest of the party.

By the time we entered our base camp, we had ridden another 20 miles. For the next few days, some in the group rode to where centuries-old glaciers and the previous winter’s snow refused to melt in the summer sun. Another glacier lake enabled two riders to catch and release more than 70 fish. The guide explained that since few humans had likely ventured to such remote spots, the fish were captivated by the shiny lures and bit them practically every time they hit the water.

Every evening around the enormous camp fire, with the horses grazing freely (large cowbells affixed around their necks) we talked about the days’ riding highlights, perils, and challenges.

On the last day, the guides awoke at 4 a.m. to begin packing up all the tents, sleeping bags, tarps, clothing, and food onto 14 mules and horses, and we rode out at 9 a.m. We were more aware of what to expect during the 20-mile ride back to civilization, and we tried to absorb the imposing landscape – realizing we may never have an opportunity to return.

After farewells to our mounts, who had carried us sure-footed and safe over miles and miles of rough terrain, we traveled back to Triangle X Ranch and arrived just in time to witness the daily ritual of releasing at least 100 horses from corrals so they could trot and gallop across many acres and a highway to spread out on a great plain for an evening of grazing with the Grand Tetons as looming sentries.

Definitely a horseback riding trip that was not for the faint of heart, but we all agreed that any future rides will likely pale in comparison.

Angel Feather, Inc Turns Their Expertise Toward a New Endeavor