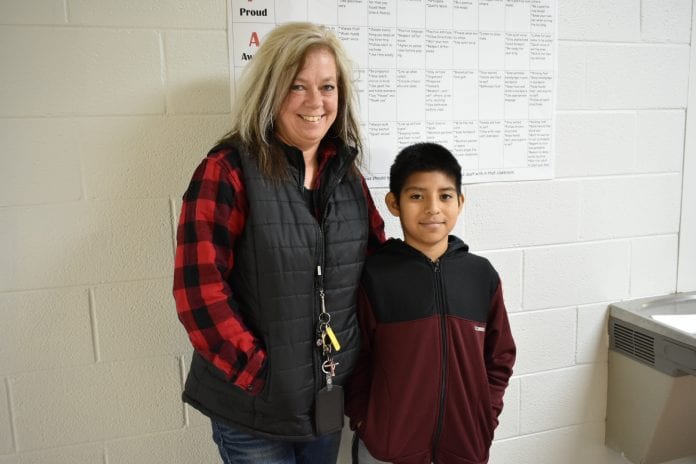 In the movie “The Grinch Who Stole Christmas,” the Grinch finds out the true meaning of Christmas and all The Whos in Whoville hold hands and sing, in spite of not having any presents. That is the wish of one little 10 year old boy named Daniel Candelario.  Daniel had just seen the new “Grinch” movie when he was struck with an idea. Why don’t all the people in Franklin meet at the Town Square on Christmas Eve at and hold hands and sing Christmas Carols. Well, Daniel told his interpreter, Carolanne Elliott, about his idea. Daniel is deaf and Elliott speaks to him through sign language. Although Daniel would not be able to hear the music, he would like to see the people of Franklin hold hands and smile. That is Daniel’s Christmas wish this year. When Elliott heard his idea she was very moved by it and thought, why not post his wish on social media to see if anyone responds to his invitation. So, she posted his Christmas  wish on “Macon Issues” hoping someone might respond and to her surprise there were a slew of responses, all positive. Upon reading the responses on social media, Elliott felt compelled to find a way to make Daniel’s dream a reality. With the help of some  school personnel and the town manager, Summer Woodard, his dream appears to be coming to fruition. People are scurrying to make this event a success. There is even talk about serving hot chocolate and cookies.

Daniel comes from a family of five. He has an older sister Veatriz, 13, also known as BB, who is also deaf. He has a  baby brother, Ismael, whom he adores, who is almost two. His dad is a carpenter and his mother stays at home to care for Ismael. The family has a dog, named Sandy, who is one year old. Daniel attends East Franklin Elementary School and is in the third grade. Elliott has been by his side since he was in preschool. He has been learning sign language since he was four.  His parents do not know the official sign language, but as a family, they have mastered their own form of sign language at home and they can communicate effectively with Daniel and Veatriz.

Daniel does well in school. He has a lot of friends and his best friend is Nathanial, who is in his class. He also has a girlfriend named Cheyenne who is in third grade but not in his class. He is very fond of Cheyenne and is always watching to see her in the hallways and at lunchtime.

Daniel is very good at playing the video game, Fortnite, but he has to go over to his neighbors house to play with his friend, since he does not have his own  Xbox. He can even replicate the dance from the game Fortnite so well, that you would think he could hear the music. For Christmas, Daniel would like his own Xbox, more Panther gear and a Christmas tree for his family, and, oh yes, for the town to sing and smile on Christmas Eve.

Daniel does not like to talk about himself but when asked what words describe him best he said, happy, jokey, lover of sports, smart and caring. His interpreter wholeheartedly agrees with his description of himself.  She says that he is an endearing boy with a big heart. He likes it when others smile and are happy. His caring side came out the Tuesday before Thanksgiving at school when he asked the whole third grade class for a big hug. He felt that this hug was needed because the students would not see each other for five days during the Thanksgiving holiday break. Of course, they all obliged. He is also a very good artist and he loves to draw pictures.  He did admit that he does not like math so much but he likes all his other subjects.

If you would like to meet this incredible little 10-year-old boy with a big heart, named Daniel Candelario, who just wants to see people sing, hold hands and smile, you will get your chance on Christmas Eve, if you come down to the Town Square at 6 p.m. to participate in the first annual Christmas Carol sing along. You will be able to recognize Daniel by the boy with the biggest smile.  The event will be sure to put a smile on your face, too.