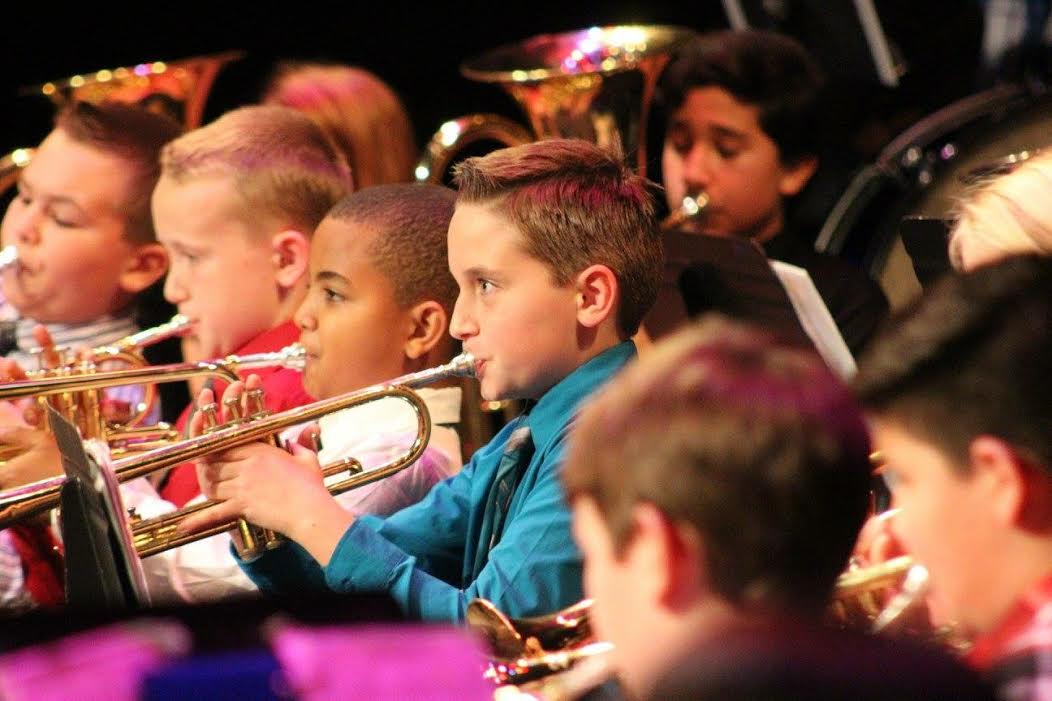 The Franklin High School Marching Panther Regiment has risen to fame over the last few years, winning awards, marching in national parades, and bringing home championships. But before students dress in the red and white for Franklin High School, they often begin their band career earlier, at Mountain View Intermediate (MVI) and Macon Middle School (MMS). As their first introduction into band, both MVI and MMS serve as important foundations for students.

“The band programs are of tremendous importance to our students and schools,” said Macon County Superintendent Dr. Chris Baldwin. “These programs are vital in promoting critical thinking and creativity.  Band and music also help to build a sense of community within our schools and develop positive character traits.  Programs such as these also help students remain connected to their education and graduate from high school.”

The Macon Middle School band is directed by Thomas Graham and currently has 92 students enrolled. At Mountain View Intermediate, the band is directed by Jennifer Huckabee and typically sees about 80-100 kids throughout the year for the 6th grade band.

“Fifth grade gets to try out the instruments this year so they can make an informed decision of what instrument they might like to play and be successful at or if band isn’t really the right decision for them,” say Huckabee. “However, next school year rising fourth graders from all of the elementary schools in Franklin will be allowed to sign up for beginning band at MVI. So I am hoping to have a band size of about 100 fifth graders.”

With hundreds of kids participating in the band programs at MMS and MVI, both Graham and Huckabee find themselves fundraising constantly throughout the year and working to raise enough money to ensure that all students who want to participate are able to. This year, the Macon County School system budget included a funding request from MMS totaling $8.900.98 to purchase six of the larger instruments needed for the band.

“Currently, we are trying to build the number of school instruments in our inventory to accommodate any students who may not be able to afford to rent or buy their own,” said Graham. “We are also in need of instruments usually purchased by the school because of their price – including euphoniums, bass clarinet, oboe, and bassoon. One area we are lacking is music stands. Several of our stands are in poor condition, and we do not have enough for each student, especially at concerts.”

MVI has similar needs and has set up an online donation profile in hopes of raising the needed funds to allow students to participate in the program.

“We are in need of so many instruments and that number is going to grow with the addition of fifth grade band,” said Huckabee. “We desperately need concert Euphoniums which are about $2,000 a piece.  Right now, I am borrowing four from the high school, but the high school is going to need them back next year.  We are in need of a xylophone and numerous percussion instruments. We need drum sticks and mallets for our percussion instruments – all of which add up quickly.  But the other needs are the basic instruments that the parents are responsible for obtaining for their child – such as flute, clarinet, alto saxophone, trumpet and trombones.  I have over half of my band borrowing instruments from the school. I have borrowed instruments from other band programs, my own personal instruments, or they have been donated to our program that I give out to my students. I have so many instruments in need of repair, too, that I can’t put into their hands, there just isn’t money for the repairs. Haywood County has included my program in a music instrument program called Links. They do free concerts and pass around a “love offering” to get instruments repaired or purchased and then in turn donate to band programs and we were fortunate enough to be included in this.  The students do not know that they have these instruments they just get to use them during their music career.  I refuse for a student who wants to be in band not be able to because of money. Band saved my life and made me who I am today and I hope this happens for other people.”

Students at both schools perform concerts throughout the year and to be able to adequately teach the program and perform, the programs need help.

“The MMS bands perform a Fall Concert in October, a Christmas Concert in December, and a Spring Concert in May,” said Graham. “In addition, we take part in the county-wide Christmas concert at the Performing Arts Center in Franklin. We also perform each year along with the FHS band during ‘Band Night’ at one of the high school football games. The Franklin community has asked us to perform at events around Franklin such as the grand opening of the Franklin House Assisted Living Facility and playing the National Anthem for a city-sponsored event  The MMS Honors Band also participates in the MPA (Music Performance Adjudication) each year to showcase our talents along with other bands across the state.  Students audition for the All District band each year and we have had eight students selected over the past three years. We travel to Cullowhee every year or so and watch the Catamount Band in rehearsal and take an end-of-the-year trip to Dollywood.”

“We perform at four total concerts, two at Christmas, this year we were fortunate enough to perform at the Smoky Mountain Preforming Arts Center and two in the spring one being on the high school stage,” said Huckabee. “We also do a community service project, the past year we did a Toys for Tots drive.  This year we plan to play for our Special Olympics team send off.”

Both schools fundraise throughout the year to raise money, but the needs are greater than the amount raised. At MMS, the band participates in the “superior” fundraiser card, which lists discounts to local and national businesses. Since it is the largest fundraiser, MMS uses the money raised to buy new instruments.

“In addition, we have a talent show in April each year to help in buying new music, repairs, and other operational costs of the band,” said Graham. “The band provides an avenue for all students to excel, even though they may not in some other areas. Band is a family and allows students to build healthy relationships with their peers and belong to a team working toward the same goals.  The band allows students to assume the role of leader at times and engages a child’s mind in ways that other classes may not.”

MVI is planning on doing a raffle during the Spring concert in addition to other fundraisers. “We are also doing a raffle at our spring concert,” said Huckabee. “We do several restaurant fundraisers throughout the year. On Tuesday, April 18, Fat Buddies is hosting MVI Band day with 20 percent of the whole day’s proceeds goes to our band program, so please go out and eat lunch and dinner at Fat Buddies. The band department as whole, from our beginning band thru the high school, empowers students to not only learn how to be a musician, but how to be future leaders of our world. I have former students that are now at the high school who are the leaders of the high school band, they get their foundation and their roots here with me. This is that one class that they may actually succeed in where their regular academics they may struggle and everyone needs a place to be successful. I expect greatness out of them and refuse to back down on these kids. The whole music department in Macon County is committed to excellence and training our future leaders, the students that are the ones I hope and pray are making the decisions for my children’s future.”

Both Graham and Huckabee are appreciative of a supportive community and the district, but over the years, the programs’ needs have surpassed the allotted funding and they are in need of significant help.

“Our school administration has been very helpful, but having a limited amount of resources, they are only able to help so much,” said Graham. “Instrument repairs, purchasing new instruments, new music, and music supplies are all ongoing expenses that a band program must confront.  Our band has been penalized at adjudication because we did not have certain instruments in the band, including the oboe and bassoon.  Our students work as hard as any in the state and are very talented. I would like to see them afforded the same opportunities as other bands throughout the state.”

“I am so thankful and honored to be the director of the band program that gives the students the starting roots to their musical career. I have the best job in the world, doing exactly what I love to do and what my band director did for me so long ago,” said Huckabee. “I am thankful that we work in a county that the school board values and understands the importance of the arts and helps foster our programs.  I hope that with the continued support of the community we can continue to get instruments into the hands of any student who wants to start this musical journey.”