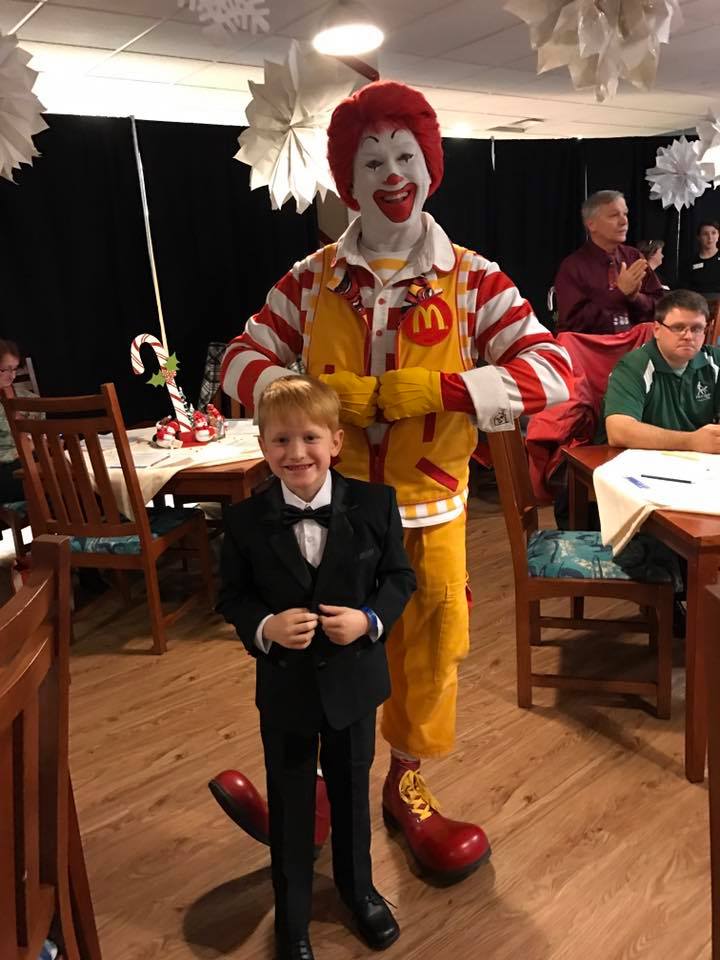 When Alabama and Clemson were announced as the first national championship game rematch in college football history, two local friends jumped at the opportunity to have a rematch of their own. Last year, Kevin McCall and Mike Gibson made a friendly wager on the championship game and after Alabama won, McCall, a Clemson fan, found himself at the corner of the Franklin Plaza, donning an Alabama jersey waving a “Roll Tide” sign.

“We decided to have the bet again this year for two reasons,” said McCall. “Due to all the hype it raised last year… And the fact that ’Bama and Clemson were back for the second year in a row, it was just meant to be.”

Last year’s bet wasn’t just a friendly wager between two friends. After the attention the bet got on social media, with the help of Macon County Sheriff Robert Holland egging it along, McCall and Gibson decided to take the opportunity to do something good for the community. While McCall waved at passing cars sporting the crimson and white, members of the community stopped by to support the cause and donate to a family in need, raising more than $2,000 for a friend who had a lifetime of health issues.

So this year, when Alabama and Clemson once again rose to the top and were set to face off again in the national championship game, the two friends decided to make another bet, and help another family.

When Clemson defeated Alabama 35-31 on Jan. 9, McCall got busy plotting his revenge. The pair settled on a basketball shoot out, with “special” attire planned for Gibson as a result of his team’s loss.

On Saturday, Jan. 21, Gibson and McCall will take the court during the halftime of the boys basketball game at Franklin High School for a shoot out. Donations can be made as a pledge of $1 a shot or just by donation.

“It was decided to stage a charity event because people started asking about the bet well before the national championship,” said McCall. “We wanted to tie the fundraising in with the high school, because we wanted to do something to support the Zari family and Anthony Zari is a School Resource Officer at Franklin High.”

Ashton, son of Amanda and Anthony Zari of Franklin, has kidney disease and is in need of a transplant. Ashton, his mom, and brother and sister have been staying at the Ronald McDonald House in Columbus, Ohio, while Ashton receives the treatment he needs. Ashton turned seven on Christmas Eve, and the family spent Christmas, and every holiday since arriving in mid-October, in the hospital. Anthony was able to travel to Ohio to spend the holidays with his family, but is now back in Franklin to work.

“Anthony and I are overwhelmed at the outpouring of love that our community has shown towards our Ashton,” said Amanda. “I am constantly in awe at the generosity of strangers (and friends). As a parent, when your child is struggling you do whatever you have to do. I am so thankful for each and every person who has donated; it has been a true reminder of how wonderful our small town is. You guys made Ashton’s Birthday Wish come true and now you all are blessing my family. Thank you. Thank you. Thank you.”

When the family got the news that Ashton was going to be in Ohio for an undetermined amount of time, Amanda had to quit her job at the Franklin Health and Fitness Center to be with Ashton during his care. With surgeries and tests scheduled weekly, the family will likely remain at the hospital until Ashton can receive a transplant.

Even though Ashton is struggling with his own health issues, and his family struggling to make it through the long distance and the loss of a job, the family goes above and beyond for others. While at the Ronald McDonald House (RMH), Ashton insisted on raising funds for the house to help kids just like him, staying there for medical reasons.

Since getting sick about three years ago, Ashton and his family have raised money every year for RMH, a nonprofit organization that houses families in a home-like setting while being close to the hospital.

After hearing Ashton’s story, McCall and Gibson knew they would be the perfect family to benefit from their friendly bet.

“Mike and I are very very humbled and appreciate everyone’s support throughout this fundraiser,” said McCall. “It’s far better to give than receive. We just hope it helps this family during an extremely tough time. No one should ever have to go through the heartbreak of watching a child go through sickness. We all pray for his recovery.”

The pair has already received nearly $500 in donations and are hoping to reach a goal of $5,000, all of which will go to the family. Franklin residents Ben Vanhook and Josh Drake got behind the bet and have committed to matching whatever McCall and Gibson raise, dollar for dollar.

Donations will be accepted at the Jan. 21 basketball game or can be dropped off at the Farm Bureau Office on the Highlands Road.

Macon resident reflects on life and legacy as a powerboat racer

Town asks business owners and employees to voluntarily not park on...