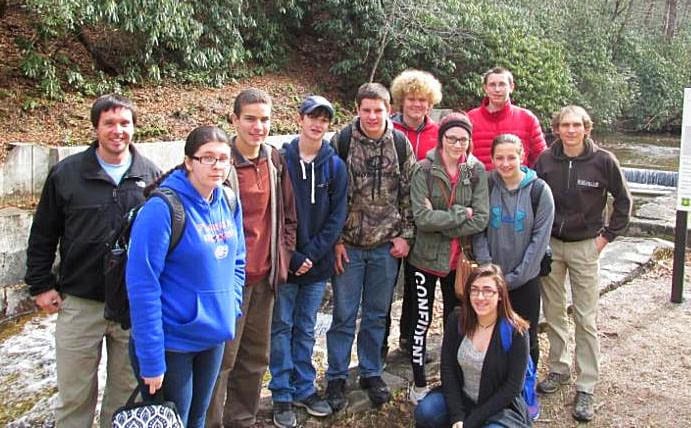 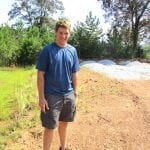 “I want to be a good steward of the environment.” A profound statement for the average person, let alone a 15-year old early college student; but Cody Zuiderveen is not your average person. For starters, he’s already narrowed the choices for his future career when he “grows up” thanks to life on the family farm and his STEM (Science Technology Engineering and Math) program experience.

According to Macon County Schools STEM Coordinator, Jennifer Love, Zuiderveen is an amazing student. He is one of nine students who participated in the Shadow a Biologist program at Macon Early College (MEC) last semester. He hopes to participate again in the spring and can see himself as a mentor.

The mentors for Shadow a Biologist along with Love were her husband, Jason Love, a marine biologist with Coweeta Hydrologic Lab and Coweeta Long Term Ecological Research (LTER), and Jason Meador, also a marine biologist and Aquatic Program Manager at Mainspring Conservation Trust. The Loves helped with most of the field trips, including instructing students on research and data collection methods and Meador was very instrumental with his knowledge and passion.

“Meador worked with our students on every session and did an amazing job,” said Love. “We also appreciate Coweeta Hydrologic Lab and the U.S. Forest Service who allowed our students to look at forest service management practices and the difference when you manage a forest . . . compared to maybe an urban stream.”

“I am kinda interested in biology as something I might do with my life later or maybe engineering,” said Zuiderveen. I love the mountains, fishing and living near the streams. I’ve lived on a bee farm since before middle school, so I grew up outdoors and love learning about the environment. I feel the program did a great job of that.”

Mark Sutton, Principal at MEC, believes that STEM benefits students and the community. “STEM gives the hands on experience and interactions that our students are missing. It also motivates students and expands their minds about future careers. As a Macon county native, I wish I had been exposed to more career choices when I was growing up in Macon County Schools. I believe we are doing that through STEM now.”

Zuiderveen has been motivated in more ways than one, and his parents share his enthusiasm for community investment. He says that after attending a PTSO (Parent Teacher Student Organization) meeting, his mother Tami Zuiderveen learned that MEC had plans for a basketball court. A site had been chosen, but there was a delay in leveling the ground. After a family discussion, Cody asked his father, Scott Zuiderveen if he would allow him to level the ground. Zuiderveen agreed and after receiving the required approvals, he brought the farm tractor to MEC for his son to dig out a flat spot.

As STEM Coordinator, Love often emphasizes that STEM is about finding solutions to problems, and Zuiderveen took the learning to heart. “Shadow a Biologist really is trying to show the students at Macon Early College what are some of the issues we have in our community and that there are solutions to these problems,” said Love.

“We went to a couple different streams where we tested the water for acidity, screened the water for microorganisms, and put them in a dish to see what organisms lived in the stream. Based on our chart that could tell us the health of the stream, if there were these types of organisms it was healthy; if it were these, then that was the right acidity and soil level in the water. At Crawford Branch that runs through Franklin, there was trash in the stream. They completed a restoration on it a couple of years ago, so it was a lot better than it had been. We were able to determine it was a semi-healthy stream and definitely improved from what it was.

“We also did fish shocking. Our mentor had on a backpack battery-powered shocker where he had two probes that he stuck in the water on the sides of this narrow stream. It would send an electrode between them and stun the fish. They would flip upside down and then flow down the river. We would scoop them up in nets and put them in a bucket. We wanted to see what fish were in the water to determine the health of the stream, and then we returned the fish to the water.

“What we were most concerned about were invasive species and whether they were taking over and competing for the food with the other fish. Eventually, if they are stronger fish, they can overtake the water and the native species can’t thrive any more and are killed off.”

Zuiderveen emphasized that the health of the stream determines the health of the environment around it and what can thrive inside and outside the water. “It shows how well we are being stewards of taking care of our water. The community needs to be aware of the fact that pollution, runoff and trash in the streams is bad and the organisms are not going to survive for long.”

Benefits students take to the workforce

“I think it is important for them to see and learn that the collaboration they are doing in the school . . . working as teams, really does translate to the workforce,” said Love.

Teamwork was key at Crawford Branch, where according to Zuiderveen the students worked together to assess macro-organisms and fish. They recorded their data about the health of the stream and their assessments. Sometimes the teams came to the same conclusion and other times they were encouraged to re-examine. When student recordings were not quite accurate, the mentors would explain the shortfalls.

Asked to evaluate skills he felt were transferable to the work environment, Zuiderveen said, “Growing up on a farm, I’ve always had a good work ethic and my parents cared about nature and ecology. Biologists need to have pretty strong work ethics and know what they are doing. If not, they can report data falsely and have a negative impact.”

“Students may realize that they are very passionate about becoming a biologist or an ecologist,” said Meader. There are so many careers available within the area that directly or indirectly affect the environment and the natural resources. So understanding the tradeoffs and understanding the balance between economy, natural resources and development, we can all make better informed decisions to coexist with the natural beauty in this area.”

According to their video, the students were enlightened about protecting the ecosystem, noting that precautions need to be taken and how valuable it is to actually see what rivers look like when they are unhealthy and what can be done to restore them.

“Shadow a Biologist really gets kids outside learning about the environment where otherwise they would never have that opportunity – maybe just playing video games or watching T.V.,” said Zuiderveen.  “And even if they wanted to, they may not know how to start learning about the environment, what’s outside and how we can take care of it as a community. There is so much more than life indoors.”